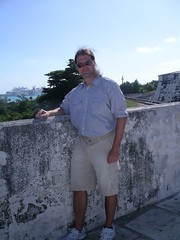 We spent the fourth morning touring Nassau.  This is where I really wish I’d had a chance to do my research.  My knowledge of Nassau (or more correctly, New Providence) begins with about 1716 and ends in 1720.  Yes, the end of the Golden Age of Piracy, Ned Teach, Anne Bonny, Jack Rackham, Mary Reade and Woodes Rogers.  An interesting time, but a whole country can hardly be defined by a bunch of murdering thieves, no matter how romantically they’re painted.

So, I was quite excited to get to see some of Nassau and learn some history.  Obviously, in a three hour tour, you’re not going to learn too much, but we saw some forts and got an idea of how Bahamians feel about their home, how proud they are of being a young and independent country, and found myself a bit concerned at how depenedent they are on tourism. (Though, what in hell can one expect from an island 7 miles wide?  The fact that it’s beautiful is their resource!)

The areas I saw were more well to do than I’d expected. One of my strongest memories of a Caribbean island was Puerta Plata in the Dominican Republic back when I was fifteen and cruise ships were still going there.  We didn’t see any tin can roofs -just homes appropriate to the climate, narrow streets that would have scared me to drive on, but were fine for the people who did it every day, and lots of government buildings and banks. 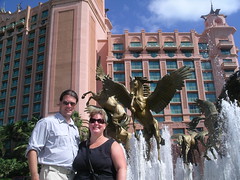 We toured Paradise Island, saw the Atlantis resort and some homes of the wealthy ex-pats.  I felt kind of weird about how that was emphasized in the tour.  However, the driver left a local talk show on, which was awesome, as I got to hear what people who lived there were thinking about, at least a gloss over of the politics of the place and was really impressed by how the host was really breaking bad on rudeness.  I think at least in the public arena, a certain graciousness of behavior is more valued, and I think we could take a cue from the Bahamians that I heard on that show.

The driver had not been told that we needed to be back to the ship by 11, so we were quite late, and would have held up the ship sailing.  (If you book a shore excursion through a cruise ship, and the party is late, you don’t get left.  You book it on your own and yes, you’re on your own).

We spent the afternoon laying by the pool after we sailed out of Nassau.  Dinner was shrimp and lobster with a mushroom pastry appetizer and a dark rich chocolate souffle with cream for desert.  Ummmm.

After dinner we had the best time dancing at a 70s party.  Now our cruise director (His first name was Jimmy and I THINK his last name was Rhodes) had enough energy to power New York.  He was very invested in people playing, which was so cool.  All the 70s disco favorites were featured with dancers, singers, and Jimmy in a police uniform from the Village People to do some favorites from that era.  He was great at getting people up and out on the dance floor, doing conga lines and all that.  We had the best time.