I didn’t think sourdough really was all that difficult when I first heard of it. Laura Ingalls Wilder described it in On the Shores of Silver Lake as being simple enough.

“When you haven’t milk enough to have sour milk, however do you make such delicious biscuits, Laura?” she asked.

“Why, you just use sour dough,” Laura said.

Mrs. Boast had never made sour-dough biscuits! It was fun to show her. Laura measured out the cups of sour dough, put in the soda and salt and flour, and rolled out the biscuits on the board.

“But how do you make the sour dough?” Mrs. Boast asked.

“You start it,” said Ma, “by putting some flour and warm water in a jar and letting it stand till it sours.”

“Then when you use it, always leave a little,” said Laura. “And put in the scraps of biscuit dough, like this, and more warm water,” Laura put in the warm water, “and cover it,” she put the clean cloth and the plate on the jar, “and just set it in a warm place,” she set it in its place on the shelf by the stove. “And it’s always ready to use, whenever you want it.”

Now, this is accurate as far as it goes. You do combine flour and water somewhere warm and wait for it to start smelling sour. But the process is a bit more involved than that. She leaves out the feeding process. You see, to get a good sourdough really bubbling, you do need to feed it frequently as you’re moving along. Once it starts to bubble, you really should discard about a cup of the starter every day and then feed it with a fresh 1:1 flour and water mixture. It seems to work best for me at a cup each. You’ll know that it’s good and strong because it will start to grow and be a bit thick – like a really hearty pancake batter.

Now, throwing away all that flour offends me. If I had local friends who liked to bake a lot, I could give some of it away to let them get their own starter going.* However, I did something a little different.

At first, I thought that the starter was done after starting to bubble a few days and getting that sour, yeasty smell. I made a loaf of bread from it. But the dough hadn’t risen nearly enough even after 15 hours, and the resultant loaf was a bit too dense and chewy. Because I use a method where I bake it in a Dutch Oven inside my oven, I did get some steam proofing, but it wasn’t up to the standard I like for bread.

Not wanting to give up, I “cheated” and used the starter in making my bread, while adding a little yeast to the dough. Even though the starter wasn’t as strong as it could be, it still added some texture and character to the bread, and allowed me to feed the starter without having to discard a cup of the stuff every day. You have to discard some after you feed it to keep the growth balance right. Don’t just get bigger container. It weakens the strain.

Yesterday, Horace (yes, I named my starter) decided to start partying. He grew so much he bubbled up over the top and soaked into the cloth I had covering him. 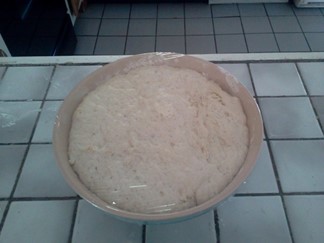 So I decided to take a little risk and try making “real” sourdough break without any added baker’s yeast. I mixed up the dough late at night and when I came down the next morning, I saw that Horace had really been flexing his muscles. That’s a better rise than I usually get out of the dough I make this way with baker’s yeast.

Because I make a very slow-rise artisan type bread, it’s really ideal for sourdough. I poured this out on a floured surface, sprinkled it with some flour and set it up to rise for another couple of hours on my pastry board.

And Horace was still as active as ever. I got a nice second rise out of the dough. 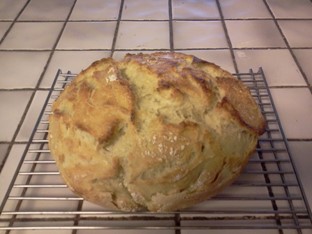 As you can see, Horace really did his job on this loaf. That’s as fine a sourdough loaf as ever I did see. I just took this out of the oven and haven’t tasted it yet (other than breaking off a bit of crust), but this looks like the real thing. Well-risen, crusty and delicious.

I’ve included the recipes for the sourdough starter and the bread I make. They’re really pretty easy. Hope you enjoy. 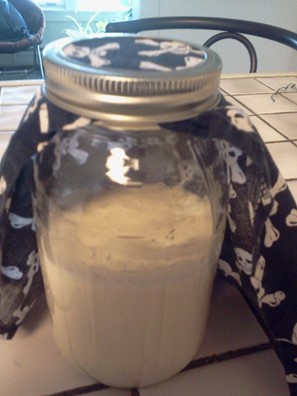 (Horace is pictured on the right. He was fed last night and transferred to a clean jar this morning.)

1c. unbleached flour. (I use King Arthur flour as my basic go-to flour and have for years. It’s cheaper than specialty flours and works great for bread. No, it’s not because I live near the local headquarters. I started using it years before I moved up here.)

Combine the water and the flour in a glass or ceramic container that is at least four cups in volume. I use a quart Mason jar. Stir until smooth and let sit. You can, if you are impatient, put in a bit of baker’s yeast. If you’ve been doing a fair amount of bread baking in your kitchen, or it is in the fall, you really don’t need to bother. The wild yeast is enough.

Cover with a clean cloth and let sit. When you pass by or think about it, give the mixture a stir. When the mixture starts to bubble and get a kind of yeasty smell (this may take anywhere from 24-72 hours, depending on how warm your kitchen is and how much wild yeast you have) discard a cup of the mixture and add a cup of water and a cup of flour. If you can’t stand to throw the mixture away, you can use it in pancakes, waffles, muffins or even “normal” bread.

You’ll know your starter is a good and strong with a robust yeast colony when it grows 50-100% in size when you feed it. Then, it’s ready for baking bread.

I bake a loaf just about every day, so I do not bother to refrigerate my starter. When it gets too hot to use the oven, yes, Horace is going into the fridge to be fed once a week and revived in the fall for serious baking. If you bake less often, you can put this in the fridge, too. Just take it out to come to room temperature and feed it about 12 hours before you’re going to bake.

¼ t yeast (if you’re in the “cheating” phase. Don’t bother if you have a really strong starter)

* And if you’re local and want some, gimme a mason jar and I’ll be delighted to give you a cup of starter. 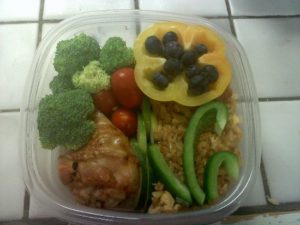 I’m going to be working in a commercial office regularly for the first time in five years or so and one of the things I’m thinking about is lunch. Oh, stop looking at me like that. People do eat lunch at the office every day, whether it’s a sandwich bought somewhere or something brought from home.

My inner Scrooge simply cannot cope with buying lunch every day, so it’s going to be a brought lunch. And that means bento!

The bento to the left is just made in one of those cheap flat 750ml Glad containers. It’s a chicken drumstick (a very common bento meat for me as it’s cheap, easy to cook up and goes well in a bento), broccoli, grape tomatoes, fried rice left over from dinner that night, Cucumbers to separate the meat and rice, some green peppers, a yellow pepper, and some blueberries. I like the way it looks, but I think that particular bento, being assembled from leftovers and prepped-ahead food, might have taken me all of ten minutes to put together.

So, it’s a healthy enough lunch. My husband, who has worked with some of the people I am going to be working with, has commented that his bento were sometimes commented upon, and it might be that people will be interested to learn that I was the one making them. Could be. 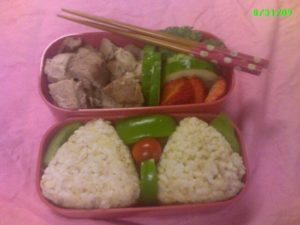 Me, while I do make bento partially to satisfy my inner Scrooge, it’s also a morale thing. It feels good to open up a pretty lunch and have this little capsule of specialness during the day. It’s more or less why I make them. They’re like having tea with the silver teapot or using the good china for dinner.

I curl up in a little ball internally whenever I am in a group of women where some other perky woman begins her comments to us with “Ladies!” It is not that I hate being called a lady. While not really one by the standards by which I was reared, certainly I understand the compliment involved and am a product enough of my times to like it.

It’s that I consider the verbal tic indicative of the “cheerleader” type of woman. Cheerleaders are attractive, of course. They’re also competent, skilled and fun. Much of what they do can be found on many a dance floor and gymnastics mat, after all, and requires enormous amounts of skill and practice. But they’re accessories. Their attractiveness, their skills? All of that is to serve the purpose of being an accessory to someone else’s (usually male) achievements. It matters not one iota how hard one has worked, nor one’s own abilities, the cheerleader type essentially has it as a function to complete and pull together someone else’s outfit.