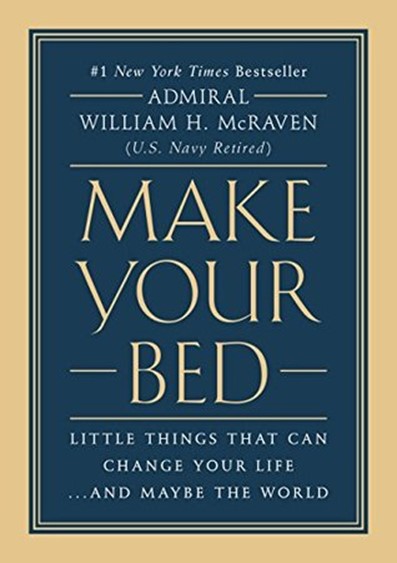 I’m reading Make Your Bed: The Little Things That Can Change Your Life…. and Maybe the World.

Things a SEAL might have to say might be things I can go along with, or things that might make me chew my lip a bit. And so this does. However, I do not necessarily have to unilaterally agree with everything an author puts down to find it valuable. (Being a Heinlein fan, the world oughta be grateful for that, just sayin’)

ADM McRaven says something quite early on in the book that rather struck me between the eyeballs.

Now, I am a bed-maker and have been since toddlerhood. Mom taught me to do so and it’s What One Does. You know things you kinda do without question? I do that. So, it was easy for me to agree with the idea that you start the day with making your bed. His commentary – that you start the day with a completed task and see the evidence of that completed task when you complete your day, really hit home to me.

I will sometimes complain of Not Having Accomplished Enough at the end of a day to have my husband send me to my Bullet Journal in irritation, telling me to review and see if my day was really as lazy as all that. (In general, it was not).

The idea that an extremely successful man in a very tough career looked to something to remind himself that he did at least one thing well that day was an interesting one and made me realize all these years I was doing only part of the task of making my bed.

Acknowledging I do it is actually important, too.

I’ve said repeatedly that I felt the real issue with the Konmari Method was that it did not teach maintenance.

I have a detail cleaning schedule that I freely admit I snarfed and adapted from FlyLady. This week was supposed to be the floor and craft supplies in my closet. I was out of town visiting my family, so I did not do the “Little Chores” day by day as I usually do.

I was chewing on this on the train ride home, as I’ll skip cleaning closets whenever I can. I have hated cleaning out my closet since I was small.

I decided I’d just suck it up and do a week’s worth of detail cleaning in one day. I’d spent a lovely evening watching The Hunt for Red October and finishing a shawl I’d knitted on the spur of the moment for my mom. (I’m putting it in the mail for you on Monday!) With the enjoyment and relaxation of Cold War nostalgia and knitting under my belt, I felt ready for anything.

I emptied the floor of my closet, culled some craft supplies, got a stuck drawer in my craft bin unstuck, culled some bags and purses that don’t spark joy, vacuumed it, and then put everything away.

I Konmaried my house back in 2015. While I am dubious of the Tidy Forever promises, I think that Ms. Kondo has a point. I have, at least a couple of times a year, culled items from my closet that no longer sparked joy.

Even though I’d broken out the job into three planned fifteen-minute sessions spread out over a week, it really took less than half an hour.

That simply would not have been possible. I would have had too many possessions. Decision fatigue would have been quite real, and I would not have developed the habit of asking myself, “Does this spark joy?” and releasing any guilt I feel about releasing items I no longer want, need, or use. Nor would the “Fifteen minutes of decluttering a day” of my FlyLady days have addressed this, as I’d been doing FlyLady for a decade and a half (off and on) by then. I never addressed the closet enough to make its routine minor decluttering worth anything.

As I have stated repeatedly, I do not have a perfectly tidy home. I have a home tidy enough to make me happy and that’s all good. The public areas are far less than the fifteen minutes worth of messy at any time prescribed by FlyLady. Closets and drawers can be another matter, but I have a system to address them regularly that is much, much more useful and painless post-KonMari.

So, was Marie Kondo right? I’d love to hear your call on that!

I’ve had it with self-improvement literature.

This is not because I consider Improving Oneself an unworthy goal. Rather the opposite. Ultimately, I think that it’s the second most important goal you can pursue.

The most important goal, of course, is Improving the World.

Sometimes the goals intersect. If you’re a cruel jerk, certainly learning to be kinder is going to improve the world – especially for anyone close to you.

I did figure out what it is that a lot of self-improvement literature, especially crap written by 30-something male bloggers, revolves around what I can only call status seeking behaviors involving a better body or a bigger wallet without giving even the slightest thought as to why you’d want it.

They have titles like Crushing Excellence and How to Achieve Your Dreams and Be the Most Awesome You or some nonsense.

They never, not once, ask you to ask yourself why you have the dream you do. Having achieved decades-long dreams that turned out to be damn nightmares, I think this is a real flaw in the process.

If your dream is money, why? Seriously why? How much do you need and why do you need it? Money is not a unilateral good. It’s the lack of it that sucks. So, knowing why you want a specific amount is a good thing.

A lot of times personal excellence will revolve around physical fitness. Anyone who has met me knows full well I am a big believer in exercise. Thing is, it’s not a moral thing. Being a better athlete doesn’t mean you’re a better human. Being strong or having a lot of endurance is nice, and if you’re healthy enough that exercise will give that to you, it’s wonderful to have, no doubt. But it’s hardly a moral value.

Which, I think, brings me around to my objection to a lot of “success” literature.

A lot of the literature doesn’t talk even a little bit about character. Are you kind? Are you honest? (No, kindness and honesty are not diametrically opposed) Are you the kind of person who thinks that making small improvements to the world around you is a Good Way to Live? (Quick test for the able-bodied: In what condition do you leave the shopping carts in the parking lot?)

The idea that developing one’s character isn’t even on the radar of a lot of these writers makes the whole Crush Your Goals mentality seem like a lot of cotton candy nonsense. Might taste pretty nice, but I don’t see that it has a lot of substance.