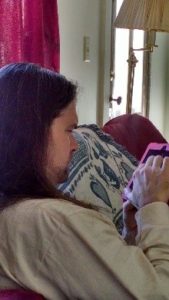 Think of a 45 year old man playing a video game.

Here’s a dirty little secret about gaming. If you pick the right games, you’re training your brain to think along certain pathways.

I first encountered this phenomenon when I was playing Sid Meyer’s Civilization II. The premise of the game is to build a civilization from the Mud Hut stage to Space Flight. Think of developing technology. Think of how the terrain and available resources effect that. (Can’t make steel without carbon and iron, right?)

I mean, if you have a decent education, you already know it. You’ve been exposed to that fact. But chances are very good unless you’re involved in making metal objects you haven’t used that random knowledge, so it’s not something you’ll immediately think of as part of an intuitive process.

So what? I hear you asking.

Well… Knowledge isn’t useful unless you have the habit of accessing it outside of its acquisition environment. In human speech, learning Stop Drop and Roll in first grade doesn’t do much unless you’re going to remember that if you see someone catch fire at a picnic or something.

If you use something in a game, your mental pathways retain that.

I self-published a fantasy novel some years ago. When people gave feedback on it and were trying to be nice, the one common thread was how realistically the world worked. When I was doing the development work on it, a partner of mine at the time saw me swearing over a map I was drawing and suggested, “Play Civ.”

He was quite right. It worked very well, and having the many, many hours I spent playing that game opening the neural pathways to the integration of terrain and politics did, indeed, help me build a world that worked realistically and drove political conflict very logically. (Not that I can plot for crap, but that’s neither here nor there.)

I work at a help desk. I was getting in early, so I was often the only person there to help someone to pick up a computer. Now, if it’s a laptop in a public area that isn’t locked down, we do have a cable lock on those computers. In reality, all I needed to do was hand this person a computer. But it was locked, and I didn’t know which key was the laptop lock. I could have tried individual keys from a ring I had access to. I would have gotten to the appropriate one easily enough, albeit with some fumbling.

But to me it was illustrative of the value of video games and how they integrate the kinetic aspects of learning with the purely informational. It’s also why I hate lecture-based classes over hands-on classes for things that will ultimately have a kinetic component. 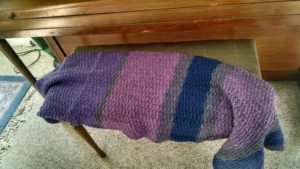 I got a wild hare and started wondering if a certain garment had made the cut during the Great Konmari Experiment of 2015. I dug it out. It had.

This is a shawl I made back in 2005. The yarn is actually much, much nicer than a newbie knitting project deserves, though I did not know that at the time. It’s a fairly heavy hand-spun and hand-dyed that I was given by a pushe^h^h^h co-worker who was also a knitting fanatic and wanted to encourage a budding knitter. This was an amazingly kind gift. I knew enough to know this was special wool and deserved to be used on a special project, but I was not skilled enough to figure out either what kind of project I had enough yarn for, or what kind of project the wool was appropriate for.

There are lots of errors in it (yarn badly joined, ends not woven in properly… a dozen other things), and it’s not a garment I wear out of the house much, but I do wear it at home from time to time when it’s a little chilly in the house, but I don’t want to dress heavily. The wool is quite warm on the back of my neck and my shoulders, so it’s a good in-between type of shawl.

For all the errors in it, it made that Konmari cut out of pure sentiment. I held it, and I smiled because it made me happy to think about making it and how proud of myself I was to be able to integrate knit and purl stitches in an actual pattern. 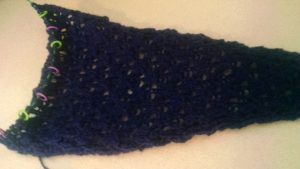 Eleven years on, this is the shawl I am working on right now. It’s a lot more complex. I’ll probably wear it to the office and other places quite a bit. It makes me happy for geeky reasons as well as because I am enjoying knitting it. The yarn is actually about as inexpensive as you can get and still be all wool, and possibly something this complex really deserves a high end yarn. The recommended yarn for this project cost upwards of $60. I spent more like $15.

I like to look at how I have progressed in activities – be it swimming or whatever. Not because I feel like I necessarily have a specific goal to reach, mind. I think people who happily knit garter stitch scarves are making as good a use of their time as I do with my knitting projects. But I do like to tack on and master skills. It’s a thing, and it’s ultimately useful, so I don’t mind running with it.

(It also took me well on to 40 years before the habit was in any way a big financial return, but that’s neither here nor there. Formal education would have been much quicker!)

But I am as proud of the first shawl I made as the one I am currently working on. I cannot bring myself to blow it off as too easy or amateurish. That first shawl made me a little nervous, was stretching my skill set and made me happy to make – just like the one I am doing now.

I just wish I could read my old writing and have that same attitude. With that, for some idiotic reason, I still wince and I shouldn’t. I was doing the same thing, right?