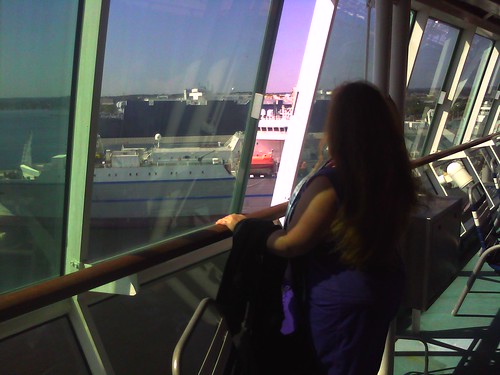 We got to the airport a bit too early, but that was okay.  The shuttle took us to the Port of Baltimore without a hitch and we were among some of the first to board Royal Caribbean’s Enchantment of the Seas.  We were scheduled to go to Bermuda, but due to Hurricane Igor, we were re-routed to Nassau in the Bahamas, and we were given a significant shipboard credit to make up for the inconvienience.  Oh pity us… 🙂

It’s been a little over 25 years since I’d been on a cruise,  and when I went, Daddy had handled all the details.  I was a bit nervous about making sure we’d gotten all the paperwork done, and everything arranged properly.  It was, so getting on board was no problem.  We walked up the gangway and I was so excited I about cried.  Have I mentioned I love cruises?

We had to wait to go to our staterooms, which makes sense, since it had probably been less than three hours since someone else was in them. So we went to the Windjammer Cafe, the ships buffet-style dining area, for lunch.  The food was better than you usually get on a buffet, but that’s pretty much par for the course on a cruise.

After that we kind of hit the wall and went to our stateroom for a nap.  Since we’d gotten up at four in the morning, this proved to be a good idea.

When we got up, of course we had a pre-embarkation lifeboat drill.  This is not actually a joke, and they’ll hustle you to your assigned lifeboat station if  you don’t go. I heard a lot of snark about how women and children first was no longer in effect from fellow passengers.  (It’s not about equal rights, you nitwits.  It’s about survival of the species… Jesus!)   A lot of people wandered off after some instructions but before the Captain dismissed them.  That got under my fingernails, even though I know a cruise ship isn’t exactly military discipline.  It made me feel a little cold to realize that in a real emergency, some people would have gotten some harsh lessons damn fast.

Then we watched the ship set sail.  The Enchantment of the Seas is about the usual size these days for a cruise ship, which means less than a meter of clearance under the Key Bridge.  I found out later that the Captain finds sailing out of Baltimore an irritation because of that.  (No KIDDING.  Makes a ship even more a slave to tides than usual).

First afternoon was pool and Jacuzzi.   The Enchantment of the Seas has a solarium where young kids aren’t allowed (not that there were many on this cruise), and was a great place to relax, hang out and watch the Chesapeake go by as we headed to the atlantic.

We had dinner at the late seating, and oddly enough were the only people at our table the whole cruise.  While this didn’t exactly destroy our fun, I was mildly disappointed as a lot of the fun of a cruise is getting to know other people.  We had a great dinner.  I had watermelon gazpacho (which I’d never tried before) and sea bass.  Peter had a shrimp appetizer with quesadillas.  I adore the hand and foot service you get on a cruise, but it’s especially nice in the dining room, and we had a fantastic waiter.  We went to bed right after dinner because we were dead on our feet.  Because of Hurricane Igor, the seas had quite signifcant swells (2.5-3 meters), but it felt like we were being rocked to sleep.

Have I mentioned I love being at sea?