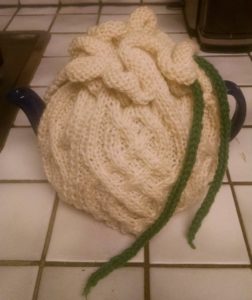 I’ve been on rather a knitting kick lately, and have been reading some knitting boards. There’s been a recent discussion thread that has gotten me at first to being sympathetic, then wrinkling my nose at the snowflake nonsense that I’m seeing.

The thread is about being annoyed at not being thanked for a knitted gift.

At first blush, yeah. Not being thanked for a gift is certainly an irritant, and certainly a show of terrible manners. I won’t argue that for a second. But as the thread went along, a lot of people were using a term that I don’t really like when it comes to yarnwork gifts.

I don’t like it at all and don’t use it. Are there people I knit for and people I don’t. You bet. It has very little to do with my closeness to the person or not, though, or how much I value them. It has to do with whether or not I think the person will (and you probably need to brace yourself for this one) like what I was thinking of knitting them. You know, as in a gift?

Even if I think someone will like it, I do not (unless they do some sort of handwork, themselves) expect them to have any real idea what went into whatever I made. If you don’t knit, you probably think it takes an hour to make the average stocking cap. See that tea cozy? It’s about the size of a stocking cap with some cables, so it might have taken a bit longer to make than the average hat, right? But you can still whip it up.

Friends, I am a very fast knitter and that took me about nine hours of work.

When I give someone a present, though, I do not expect them to know this, understand it, or treat whatever I’ve given them like that. If someone turns out not to be into whatever I made for them, I don’t take it personally. Knitwear is an extremely specific taste at the best of times. Sometimes I guess right and sometimes I don’t.

Knitting is not a piece of your soul that needs to be enshrined and treasured. It’s a hobby, and a fun one that some people will enjoy you sharing with them. That’s all.