About five years ago, I got good enough at knitting that I finally felt like I was producing something good enough to give as a present. I knitted about three sweaters for my mother, two or three for my son and one for my dad (those being the family members that like 100% wool sweaters. Between laundry habits and sensory tastes, other family members aren’t really into them, so I do other things that they are more likely to like for gifts).

I was looking at my sweater drawer and considering buying some, as the sweaters I’ve made for myself are looking a bit worn and old. These sweaters are between seven and eleven years old, and have been worn a great deal, what with me living in Northern New England and all. They were also made of Wool-Ease so I could put them in the washer and dryer. *snerk* Well, that’s what they say. I was not happy with the results over time.. Anyway, most of my sweaters are a bit ratty.

The newest sweater I have was knit about three years ago. It’s 100% wool and has been cared for properly. I love it and want it to last, but it is really my only “good” sweater. (As defined as something I’m okay with wearing to work!) Which means I am going to wear it out of I do not put some more sweaters into rotation.

So, I’ve declared 2016 the Selfish Knitting Year and I am going to knit some sweaters I’ve been meaning to for myself – sweaters that I can wear to an office. 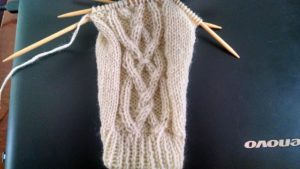 The first one I’ve started on is going to be a modified Aran. Being deep-bodied, I’m not going as hard core on the cabling as I want to, as I don’t want to look like a gorilla or something. But I am going to make it in the traditional cream-colored wool. I’m using Lion’s Brand Fisherman’s wool, which is a pretty decent workhorse yarn.

I’ve always wanted a good Aran sweater, but them suckers is expensive if you buy the authentic deal.

The picture is the beginning of a sleeve. What I’m secretly doing is using my time with knitting the sleeve as a gauge check. I did knit a gauge swatch with the cables I intend to use, but I’m double-checking it by starting on a sleeve first. Less expensive in time if I notice an egregious error in the calculation early on! I never use a commercial pattern when I knit. Ever since I read Knitting Without Tears, I’ve kind of been ruined for them. Elizabeth Zimmerman’s seamless sweater concept is enough of a template that I can do pretty much anything I like with a sweater after I give it some thought.

That said, no, I most emphatically cannot intuit how cables work. The cable at the left is the Clustered Braid from A Second Treasury of Knitting Patterns by Barbara Walker. It’s what knitters call a stitch dictionary – hundreds of stitch patterns, cables, and lace patterns that you can use to make the blank pattern of a bog-standard Seamless Raglan Sweater into a unique creation.

I’m hoping to get this done while it is still cold enough to wear it. Starting a sweater in January, especially one with cables, is a bit risky for this. But hey, what is life without a little risk? 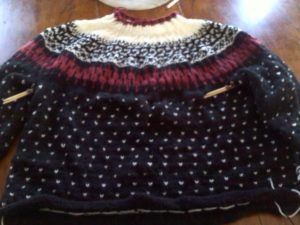 My next sweater will be a good Norwegian one – black with white ljus and red at the collar. Since I really do want to feel free to wear it to work, I am totally waffling on whether or not do use a skulls pattern in the yoke or not. Maybe I should wear my Skulls of My Enemies socks sometime and see what the reaction is. Otherwise, it would be quite similar the sweater at the right with enough variation not to be an actual copy. I made that one for my mom some years ago, and it’s still one of the knits I am most pleased with. Still, I can’t get the idea of replacing that red and black band with skulls and doing a red moving to white motif at the upper yoke out of my head. 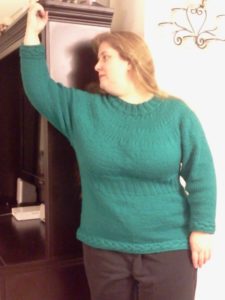 If I really get my knit on (and I might. I’m taking quite a long train trip in August) I want to make one more sweater for myself this year. I am not quite sure what kind, but I think I need one more sweater in a bright, flattering color. My aqua one is awesome, so something a little like that in a purple or some other color I see in my general clothing color palette. I have a book of edgings that might be cool to try for it. 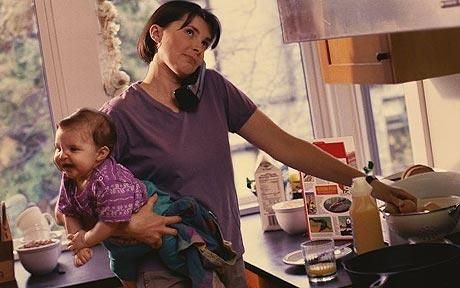 My husband is on call for Tier Two support for his job for the next week or so. It’s not a part of the job he loves, as he feels tethered to the house. But worse, he has a deadline on an art project and he doesn’t feel like he’s safe to dive into an art project when he knows he’s going to have to context switch from tech support to art.

As is my wont, I started analyzing it and got into pulling a thread about flow states and gendered work.

Flow is that state in which you have a task that is challenging, but that you have a high confidence that you can accomplish it. But more than that, as you are working on that task, you are completely engaged – mentally, physically and emotionally to the point that you tend to lose consciousness of time and self.

How does flow work?

Flow is when you are fully engaged. We experience it many ways. I experience it often when I am swimming. For that matter, I am experiencing it now as I am writing an article I am excited about.

That’s the point. You’re getting into a task. Maybe you’re painting a picture, or maybe you’re building a house. It might be that you’re analyzing why the plumbing keeps stopping up and what to do about that faulty sump pump in the basement. But you’re into it. You’re utterly focused and you might not be conscious of the outside work. Often physical discomforts or sensations not related to the task fade away and you’re utterly and completely in that moment.

The cool thing about it, in my opinion, is how it tends to engage the whole being. It’s intellect and emotion and physicality all wrapped up together and working together in an integrated and smoothly-functioning system. When it is interrupted, it can feel upsetting or jarring.

How does flow contribute to human advancement?

The geek who has been working all night on a programming problem and then is surprised by someone who points out that dawn has come and they haven’t slept is probably experiencing flow. This is the state when your brain is working at optimum. There have been several studies that link the flow state to optimum learning, and to scientific and creative advancement.

Basically the flow state is where we learn, grow and create.

Why does gender make a difference in flow?

Traditional “women’s work” is often broken down into small chunks. Making a bed doesn’t take long. Cooking a meal is often broken down into work times and waiting times. If you have small children, you probably fantasize about being able to go to the bathroom or take a shower without little hands knocking on the door. Certainly women are expected to be on call1 to respond.

Thing is, if your time is subject to constant interrupt, flow is hard. One of the reasons I adore swimming is that no-one bugs me during that time. A flow state is very easy to enter during this time, and it feels good enough that I order my own life in ways to invite it.

So, back to my husband. He’s on call. He could be interrupted at any minute and he’s deeply conscious of it. What is he doing while keeping an ear out for those interrupts? Things that don’t require flow – cooking, cleaning and doing laundry.