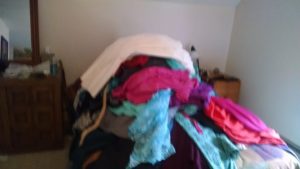 I just read The Life-Changing Magic of Tidying Up: The Japanese Art of Decluttering and Organizing. I am decluttering the house according to a method where you declutter by type of item rather than by room. It’s called the KonMari method, and was created by a Japanese woman who is a fanatic about tidying and organization — even by the standards of a culture that values order. (Though if you think Japanese people don’t let their homes get cluttered, you’re wrong.) She claims if you follow her method in full, your habits will change, and you will keep your house tidy forever. It revolves around getting rid of stuff by taking each item in your hand and asking yourself one question: Does this spark joy?

I don’t know if her claims of never backsliding will pan out. I have to finish doing this whole method to the house, and I’ve only started with my clothes today.

I consider myself something of a clothing minimalist. I dress in capsules, I try not to keep what I don’t need, I deliberately plan to get most of my variety out of accessories.

I quite literally got rid of nearly half the clothing in my closets and drawers. What I got rid of was almost as telling as what I kept.

I got rid of all but one t-shirt with writing on it. I NEVER wear them, and only one got a yes at “Does this spark joy?”

I did get rid of a lot of stuff that I had made for myself, which had startled me until I started doing it. I had several pieces that belonged to capsules that had worn out and didn’t suit my new capsules. But the idea of getting rid of them sparked joy. That was the funny part. I had loved the clothes at one time, and had enjoyed making them, and enjoyed wearing them. I was happy they’d been so useful to me, and it was pleasing to let them go now.

It went a lot faster than I thought it would. It only took me a couple of hours to pile the clothes on the bed, sort them then put away what I wanted to keep. Then again, clothes are supposed to be the easy part, which is why you’re supposed to start with that first.

I’m just wondering if I am going to run out of steam before I go through every single item on the list. My husband, who wants to pare down our bookshelves, (we read in electronic format mostly these days) is on board with using this method for our books, which is next.

So, that would be at least two categories out of the way.

I’m going to do my best to post each and every decluttering session I do via this method to see if I actually A) Go through the entire course, and B) have it stick.

I figure there’s no real down side, even if it doesn’t. A big purge of things so you’re keeping only what sparks joy can’t be BAD no matter what.

Here’s a picture of a couple of my drawers. She’s big on folding and stacking vertically, too.