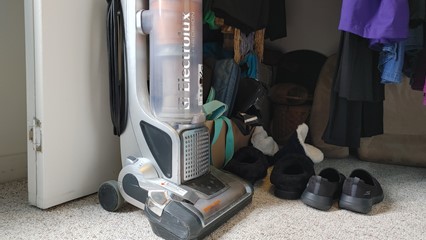 I took five minutes to vacuum my closet the other day. It was part of my routine cleaning, no big deal. It was just a quick thing to check off on my cleaning list. I removed some boxes of stuff in the bottom, a few pairs of slippers, and vacuumed. I replaced the stuff and went on with my—

No, I looked at the bottom of the closet in a state of shock and burst out laughing.

I have spent a large portion of my life trying to get organized. When I was a child, “cleaning my room” really did mean tossing everything I could think of where to put it in a closet so that it looked tidy when Mom poked her head in. I was the child with the cubby under the desk in grade school so stuffed with papers and junk that it was simply impossible to add or find anything.

This level of disorganization bothered and embarrassed me. It really hurt and made me feel like a failure.

As a teenager, my backpack also became a mess of papers, random items, books, and paraphernalia (no, not that kind. In many ways, I was hopelessly square)

As an adult, it wasn’t much better. My desk was full of bills to be paid, papers I didn’t want to face, things that were vaguely sentimental but not enough to display anywhere. My closet?

That was still the place where I hid stuff I didn’t have a place for but wanted the room at least to appear a little tidy.

How long from a stuffed closet to a tidy closet?

It took about thirty years.

I wasted a lot of that time, though. I addressed it in cycles. “Starting now, I’m finally going to get organized!” I’d spend several hours a day over a few weeks cleaning, organizing, and playing possessions Tetris with my home. After a month or so, know what? The house would look great!

Then, inevitably, the house would no longer look great. I’d clean the kitchen well enough to prevent food poisoning, but more than that? Not so much.

Being tidy over time is all about consistent action.

You can, indeed, get the house clean with heroic effort, just as you can work really hard to train for an athletic event.

The problem comes in when you do something intense for a short period. As I mentioned in my last post, heroic effort is unsustainable.

Several of my favorite housekeeping systems (Flylady and Unfuck Your Habitat) talk about starting very small – shining your sink or making your bed. They are so right!

It’s not about getting tidied or organized quickly. It’s about developing consistent habits. For a lot of people, that’s enough.

Executive dysfunction can interfere with consistency.

If you have organizational or distraction issues, habits may not be enough. Autism, ADHD, and a host of other neurodivergent issues centered around executive dysfunction make it hard to do things that seem pretty obvious to the neurotypical person. What? You need to wash the dishes after a meal? No kidding. Go do it!

As I was writing this article, I broke for dinner. Guess what is in my sink right now?

I thought about it, got up, scrubbed the pan a little, realized it needed to soak some more, and sat back down here to write. Sure, sure, I’ll get to it after I finish this, no biggie. But if my sink was full of dishes other than that pan, if I had laundry on my sofa, a desk drawer full of unaddressed bills, and my phone beeping that I needed to get up and get my car to the garage to get the brakes done, would I be getting back to that pan in any reasonable amount of time?

People with executive dysfunction issues can find their problems painful.

Maybe some people laugh and think it’s cute to be disorganized. It never felt cute to me. It hurt because I had a hard time doing what I wanted to do. I was utterly desperate to get my life under control. Completely and utterly desperate from the time I was nine years old. That’s a heavy load.

I know the whole “squirrel!” joke about distractibility is mean to make people feel better and okay with themselves. I never wanted to be okay with chaos. I wanted the chaos to stop. It hurt. It interfered with accomplishing what I wanted to. It was exhausting. It used up time I wanted to spend on other things. I wanted a clean canvas so that when I jumped from obsession to obsession to obsession, I could feel like I was using that time intelligently rather than as a distraction from things that were bothering me.

There’s an ADHD vlogger that I really like named Jessica McCabe. She’s brilliant and adorable, and being a little bit of the manic pixie thing is part of her brand. It gets people to listen to broad issues of executive dysfunction. People will accept and listen to that stuff sometimes and find it palatable if someone is small and young and cute. (She’s a LOT older than her looks or mannerisms would indicate, by the way).

So, the brilliant part. Quite sure McCabe knows what she’s doing with that because sometimes she drops the adorable thing. The pain of being disorganized or having a hard time directing attention is very, very clear. If she weren’t so cute, it would be unlikely as many people would listen to the important things she is saying. There’s more to her than cute by a long shot. (And don’t get me started on the sexism of it).

But that whole “cute” thing about disorganization. It’s not so cute when unpaid bills land you in court. That has happened to me. With money in the BANK, that has happened to me! (Or without money. *shrugs* That, too). It’s not cute when you have to buy a car at interest rates that are close to what you’d pay on a credit card. Yeah, that’s happened, too. That we’re in good financial shape now is a miracle.

There is a cultural narrative of *giggle* *giggle* “I’m so distractable!” to try to ameliorate the pain of being disorganized. Know what? It’s not funny. It hurts.

I use a Bullet Journal just about with the out-of-the-box method that Ryder Carrol posted in that first video he did about it. I tried it, and it clicked.

Know what wouldn’t have clicked? Someone making me do it when I was fifteen.

This is where you, if you have problems with executive dysfunction, might wonder if I can provide an answer for you. Know what? I can’t.

I can say, “You need a Bullet Journal.” I mean, I’ll think it. I wouldn’t say it. Know why? It won’t necessarily work for you.

What I will say is that you need to find methods that work for you.

Create systems that support you

This is going to look different depending on how you think. Does a beepy reminder go bing! and prompt you to do stuff? Do you like to have a menu of tasks that you choose from depending on how easily they grab your attention in the moment?

What primes you to take action?

What plans have you followed through on (c’mon, you do have some if you’re alive past 20), and what about them made you feel good?

My husband doesn’t use a Bullet Journal. He plans his day using a calendar app. If there’s an interrupt to a task, he’ll move it to another free time. When you first try this, I strongly encourage you to multiply your estimation of task time by at least four until you get good at estimating how long something will take. If you have executive dysfunction issues you’re struggling with, I’d bet at least a nickel that you’re not good at estimating how long things take yet.

What stops you from taking action? Can you remove the interrupts?

A simple example would be to take the dirty clothes hamper’s lid off if that’s enough to discourage you from tossing your clothes in the hamper. Still, I’m not talking about “Tips ‘n Tricks” here. I hate tips ‘n tricks! They’re like taking a Tylenol when you cut off your leg. You need to extrapolate that to life systems to support how you want to live.

Your system is useless until you define “good enough.”

I could skip the next two or three times I need to vacuum my closet, and I wouldn’t care. If I get to it every year or so, it’s absolutely good enough. “Good enough” means I address my paperwork file once a week and clear it out. I don’t have to do it every day unless I feel like it. “Good enough” is walking for five minutes on the hour around my living room until I get my 10,000 steps in. I don’t have to walk for three miles unless I want to. “Good enough” is spreading up the bed and tossing the shams at the head. I don’t have to bounce a quarter off the damn thing unless I get a wild hare to do that sometimes. Don’t give yourself an image of perfection you have to attain, or you’ll do nothing.

Remember how it took thirty years to get to vacuuming a closet? There was a time when that chore wasn’t on the “good enough” list, and ya know what? That’s fine. Have your “good enough” be slightly, but only slightly, ahead of what you’re currently doing if you want to make improvements. Incremental improvements over time, and I mean decades, are pretty dramatic when you look back.

My exercise parameters have me getting in an average of 10,000 steps a day as measured over a month. That is never going to change. If the Spirit moves me, I’ll do more. But I’m not going to keep raising the bar over and over and over. This is it. I’m good. I’m maintaining.

It takes decades to get your life in order. What small thing will you do today?