(This post contains language that is not drawing room fashion at all. At all.)

There’s a housecleaning method that many of you may heard of called Unfuck Your Habitat. You could say it’s FlyLady, only not as twee, but that’s not entirely so. It’s really meant for people whose lives may or may not fall into the Husband’n’Kids scope that is most of Flylady’s demographic. This works as well for a teenager living at home as it would for a middle aged woman with that prescriptive Husband’n’Kids.

It’s also not quite as organized. Yes, yes, yes, there are routines that UFYH encourages you to follow, but they’re pretty basic.

Having tried out both methods, I’m going to say that I like one over the other depending on how much time I have to devote to the house. Flylady is for when I am working from home. I can do housework on breaks, I’m devoting more time to home care and in my Suzy Homemaker mode. It’s mode I enjoy, as I like doing the homemaker thing a lot, but it’s not nearly as good for my bank account as some others.

Unfuck Your Habitat is much, much better when I’m 40-50 hours a week in an office. Why? The routines are considerably more scalable to how tired I am one day or another. It’s based on the idea that you should work for 20 minutes, then take a ten minute break – Lather, Rinse and Repeat as desired until you’ve worked as much as you need/want to. UFYH calls this a 20/10.

There’s more of an element of random in it, especially if you buy the app. It’s been available for a while in iTunes, and was just released in Android format. Being an Android user, I was excited to try it out.

As I said, this is not housecleaning app for when you want a Master Plan. =Oh yes, I have and like them, but sometimes you’re too damn tired to think much, and want a little motivation to do a little something.

The app takes this into account with a choice of times for different random challenges.

For instance, you’re wandering around your cluttered, messy house, feeling yucky and low energy – not really into thinking, but really wanting to do something.

Random Timed Challenge to the rescue!

Friends, you’d be amazed at how much you can get done in a paltry five minutes and how motivating it is to see things finished.

And it gets better!

If you do five of these challenges, you can get a star!

Can this be a little silly and childish? Of course. Ideally, the Real Grownup sees what needs doin’ and does it, right?

Yeah, fine. You’re probably right. But deciding I wanted a star and doing five challenges in my kitchen got me a star and a clean kitchen without feeling overwhelmed about it, so who cares? The kitchen is clean.

But suppose you want to make a plan. There might be specific things you want to do on a given day. The UFYH app does take we planners into account, too, with My To-Unfuck List.

Yes, I really do intend to do these things today. And when you do everything on your list, yes, you get a star, too. Goofy, but it does kind of motivate.

The reality is that while a clean house is satisfying, if you’ve got a big mess, you can be overwhelmed. Both Flylady and UFYH have methods to cope with both the overwhelm and keeping it from getting too bad in the future. It really depends on what appeals to you. I like both and think both are worthwhile.

Oh, and buy the app if you’re into UFYH and have a smart phone. You’re supporting female developers. The development team, from the project manager down, were women.

Now, I read a lot.  I know, big secret.  But, online social media being what it is, there are websites that will quantify that.   I tend to track my reading through Goodreads, where you can track your books, list what you’ve read and when you’ve read it, and interact with friends online about what you read.

I try to read about a book a week.  Call it fifty books a year.  More than the average for an American, but I know several people who read more. That’s cool.  I’m happy with how much I read.

Fifty books a year is a lot.  Well, it looks like a lot until you look at what I’m reading.  Some of it is Serious Literature, or Serious Non-fiction.  That tends to be history, biography and cultural analysis, with a bit of self-help and motivational thrown in.

Otherwise?   I read all over the place.  Science fiction, fantasy, sentimental late 19th century stuff that probably had yellow covers when it came out, children’s literature, YA, classics, men’s adventure, horror, you name it.

With that experience, I find myself impatient with people who are necessarily proud of themselves for only being into Great Literature.  Is there such a thing?  God, yes.  But it’s simpler than people think

Great Literature is Great Literature because a lot of people over a long period of time read it, loved it and took it to heart.   Can we analyze why this is so?  Again, God yes.  Can we predict if something new will become such?

Not so much.  It takes time.  Harry Potter is a great example.  People have loved it and it’s a phenomenon.  Will people love it 100 years from now? Dunno. I would say I doubt it.  A lot of its charm is the juxtaposition against late 20th century life.  I could also be dead wrong. People still love Dickens, and a lot of his work requires an understanding of the times.

It’s about the love that people put into it over time that makes Great Literature.  That’s my story and I’m sticking to it. 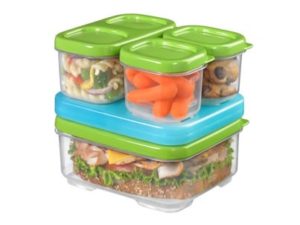 Okay, so bento are becoming more of a thing in the US as we move away from brown bagging it.* To that end, Rubbermaid has come out with some containers called LunchBlox. The one to the right is the sandwich version, but they made a salad-style one and another that’s flat and meant to fit into tall insulated lunch bags.

I do like the idea and think it’s cool that they’re being made. I’m all about bringing your own lunch to work or school, reducing waste with reusable containers and all that smack. And hey, bento is my hobby, so of course portable meal containers are going to be of interest to me.

I’m also not going to buy it.

I’ve been eyeing these damn things for months, contemplating getting one. What finally decided me was a comment I made when I was examining the little containers (stop laughing at me, it’s no worse than stamp collecting) on shopping trip yesterday. I was examining one, and my husband asked me when I was going to stop doing this every week or so and buy the darn thing.

“I want one. Thing is, if I buy it, I’ll use it twice, then go back to my usual bento box. They don’t fit in my laptop tote and wouldn’t fit in a purse, either.”

They have a volume capacity of nearly twice my usual bento –4.5 c to the 2.5c capacity of the bento. (1135ml to 591ml). Sure, if you’re going to have a sandwich for lunch, you’re going to want that. Bread is fluffy and isn’t well suited to the small-capacity bento boxes I use. Salad? Yep, lettuce takes up a lot of room.

But for me, part of the whole appeal of bento is that it is a small, filling meal that doesn’t take up much space. It’s not even necessarily a fascination with Japanese food. I mean, I love rice and all, and onigiri are delicious, but the example of a bento I’m using here is actually has two muffin tin Shepherd’s Pies. The tiers stack on top of each other and are about six inches by three inches when wrapped up to be tossed into a tote or purse.

So, while I applaud the idea that the bento concept is becoming popular in the US, I am still going to be using my more compact containers.

* I can’t recall ever putting a lunch in a brown bag unless we were on a field trip. It was considered wasteful when lunch boxes served perfectly well. Was that more of a thing than I knew?