I am enjoying this trip immensely.

We crossed the Mississippi into Iowa a little after five.

I did a coast to coast trip in a car when I was nineteen and we did cross the Mississippi on Interstate 40 in Tennessee.  Old Man River is a lot broader there, so it was a bit of a shock to see it when it is much further North, and a young and sprightly thing.  Still, there’s something kind of mystical about crossing the US and crossing the Mississippi, and we both were kind of quiet as we were doing so, wrapped in Thoughts.

At dinner last night we met an Aussie couple who were pretty much doing America by train.  He was a doctor.  I don’t recall what she did, but when they found out we had both worked for a hospital, there was a lively discussion about medical care in our two countries.  I get the impression that Hogwarts-St. Mungos is a bit fancier than the hospital he worked at.

Breakfast was with a couple of people who I think met on the train — a Chinese political science student who was studying in LA and wanted to move to Georgetown to finish up, and a young man who was a professional video game coach.  He started as a developer, became a QA tester, and then went on to this career I had no idea existed.  I admitted I liked puzzle adventure games over first person shooters, so wasn’t a “real gamer” and he rolled his eyes, disdaining the qualification.  It was fun talking to them.

We got off the train in Denver to walk around the station a little, but it wasn’t a long enough stop to do more than stretch our legs and look around. I guess that may need to be on our List of Cities to visit (I think Peter and I may need to buy a small RV…)

So, west of Denver.

You know how people go on about the scenery?  They wax poetic and take pictures and they think they’re giving an impression of what the country looks like, and I’m here to tell you, they’re stinking lies.

Pictures and words simply do not do the majesty and beauty justice.  I’m a writer and teacher.  I make my living trying to get concepts across in any way I can.  So, teacher mode kicks in and says, if you can take the trip, do it.  You can get a general idea and taste from blogs and good photography (sorry, I’m a crap photographer), but I cannot urge you strongly enough to get the experience if you can. 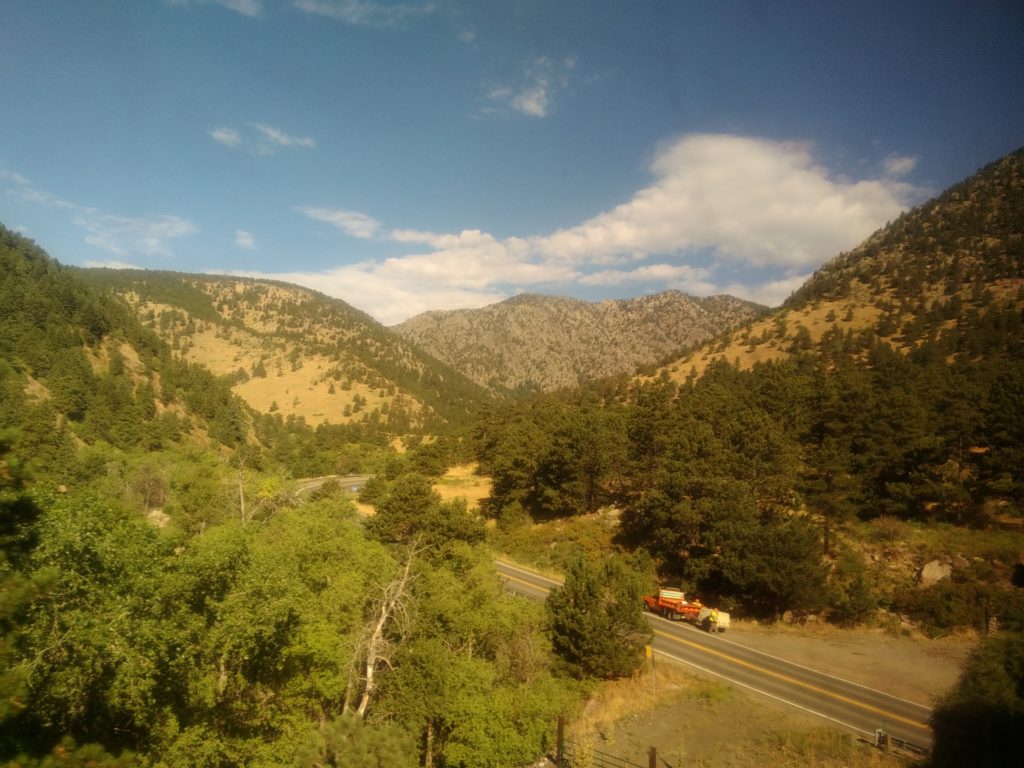 You hear people say, “It’s about the journey, not the destination.”  For the most part, I tend to be a goal-oriented person.  So it might seem strange that this is an important idea to me. This trip is very much about that.  Partially, it’s about seeing my own country, something not every American is fortunate enough to do, but also it’s about meeting different people.

We had lunch with a couple from Chicago who were on an anniversary trip to Reno.  They often travel by train, and had bought a book outlining the train route and points of interest along our route.  We saw a bald eagle during lunch, which was cool.

We also found out there is an interesting custom along the Colorado River.  At a certain spot, people will wait with  breathless anticipation to see the California Zephyr go by, and with great solemnity, drop their drawers and moon the train.  A less impressive collection of male backsides is seldom displayed, but hey, it cracked the dining car up, so why not?  I kind of wish my grandmother and grandfather had been traveling with us at that point.  My grandmother would have thought it was hilarious, and my grandfather would have been entertainingly horrified.  It would have provided hours of conversation fodder.

We had genuinely planned to get a lot of reading, knitting and drawing done during our trip West.  We didn’t.  We were simply too captivated by what was right outside our window to do anything but drink it in. 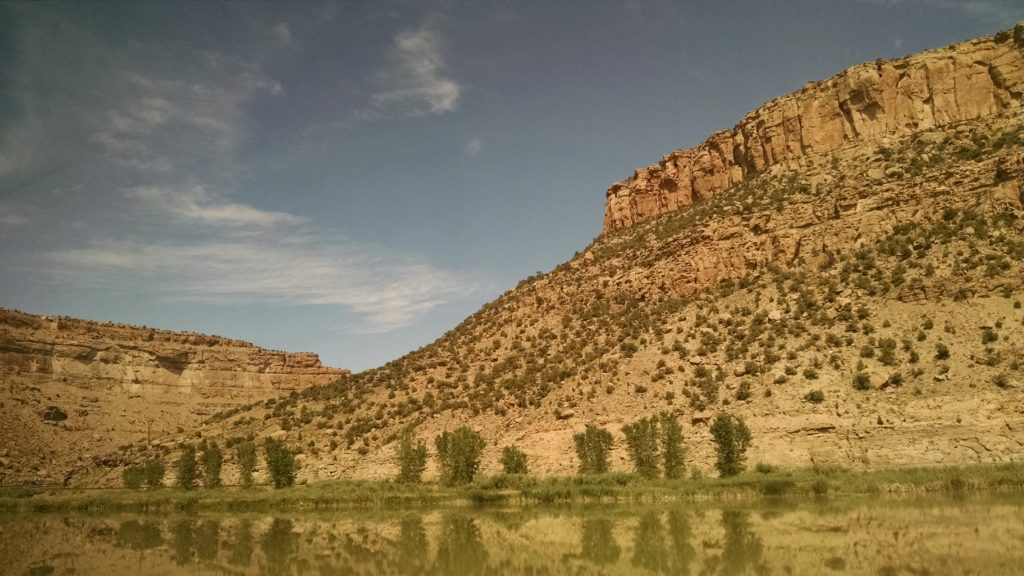 We had dinner with a couple who were doing a trip to San Francisco from a tiny little town in Indiana.  They were as Midwest as Midwest can be — proud of children, grandchildren and great-grandchildren.  The wife was an enthusiastic Cubs fan and softball coach to several generations of girls in her town.  They were also enthusiastic travelers, having been to Australia, rented a car and did a road trip across the country.  She was impressed by the friendliness of the people, and had even been invited to breakfast at one chance meeting of someone walking in town.  I try to imagine inviting random tourists in for a meal, and have to admit that would never have occurred to me to do so.

We fell asleep as we were travelling across Utah, and on to our next day’s adventure.