On  Day Two, our first full day at sea, the swells were still in the 2.5 to 3m range, so we were finding that many of our fellow passengers were pretty seasick. Neither Peter nor I were effected, which was something of a surprise.  Both of us have been seasick before.  Peter on a fishing boat and me back on my first cruise in quite flat seas.  (Not, throwing up in  my case, but certainly mildly queasy and not feeling like eating anything).

We had breakfast at the Windjammer again, and were able to get a seat right in the bow.  Since it was on Deck Nine, we started calling it Nine Forward.  We sat there for breakfast and lunch almost every day.

The Enchantment of the Seas does have a library, so we snagged a couple of books and headed over to the solarium for some sunning, swimming, a drink and reading.  But, the noise of the belly flop contest got us curious, so we had to go inspect it.

Here’s the thing about cruises — if you go prepared to play, you’ll have a great time.  The cruise director for the Enchantment of the Seas is quite the party guy, so there were constant games, silly contests, good shows… you name it.  He had a real sense of fun and theater as well as a talent for getting people to play along with him.

After the belly flop contest, we hung out in the main pool. Remember those rough seas?  Well, even though the ship wasn’t really equipped with a wave pool… we had a wave pool.  The pitching of the ship was enough to make the water slosh back and forth in the pool enough that you could body surf nearly the length of it.  While we were doing so and laughing our fool heads off, we met a lady from Fairfax, VA who was also on her 20th anniversary celebration.  She’d gotten married Sept. 15th, the same as we had.   We gushed a bit about that, how beautiful the weather was on our wedding day (and it was gorgeous that day!), and had a good time chatting. 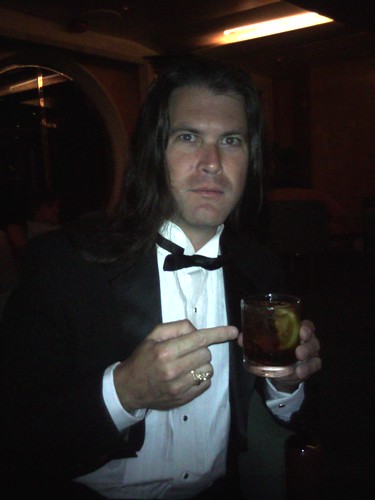 Dinner was formal.   and I clean up good, if I do say so myself.  He wore a tux and I wore a simple black gown with pearls.  At dinner, I had escargot just because I’d never tried them.  Mostly they tasted of butter and garlic and I can think of other foods as a butter and garlic delivery system I’d like better.  Peter has duck for the main course and I had prime rib.  They used a hint of nutmeg in the potatoes.  Amazingly, it really worked.

We got in one dance before seeing a goofily written show with some very skilled performers.

[Edit: There have been complaints that there was not a pic of both of us. 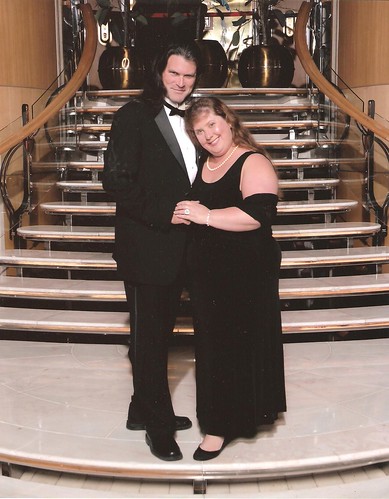