We decided that we’d explore Fisherman’s Wharf, what with some of our City Pass tickets having stuff there. We could have walked, but decided to be bums and take the bus instead since we’d be walking all day.

Cruise of the Bay 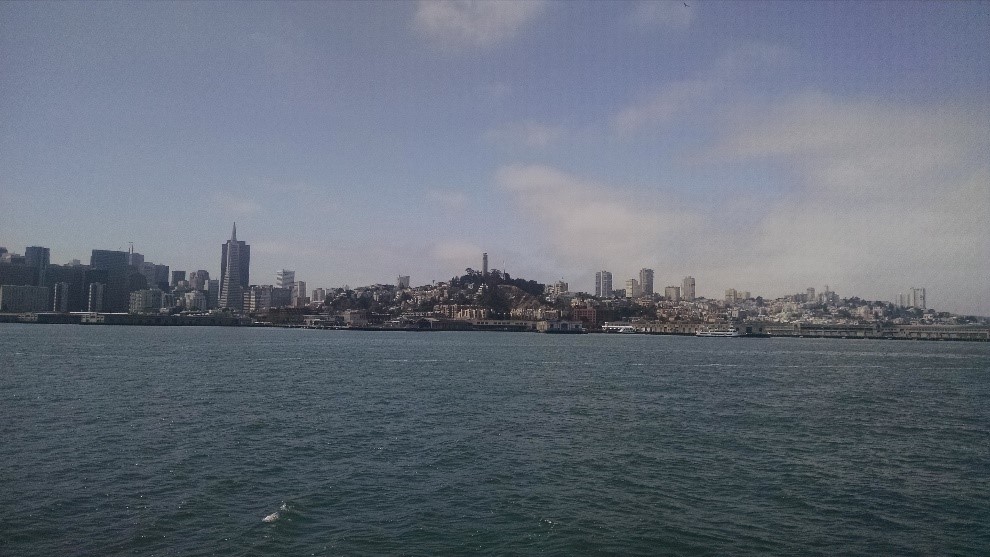 The ticket included a cruise the bay on a Blue and Gold Fleet boat. We decided to do it first thing in the morning, even though at ten when the first cruise left, the fog hadn’t totally let up. We weren’t too worried about that, as the fog wasn’t so thick you couldn’t see anything at all. It had cleared enough that Alcatraz is clearly visible.

The boat was quite substantial, with both indoor and outdoor seating, as well as a canned lecture about the various points of interest in and around the bay. It discussed the history of the city, touching, of course on The Great Earthquake of 1906, and several other things.

I was still kind of on the fence about the whole Alcatraz swim, so intended to use this as some time to scout the territory. When the boat rounded the island, I was able to see clearly from the boat and get an idea of the general course of the swim. (You aim slightly north of the entrance to Aquatic Park so you’re not swept past it by tides). Did the distance look intimidating? Not really. I could pick out several distinctive landmarks on the shore at which to aim. Waves? Eh, choppy, but I’ve been swimming in rougher since early childhood. Hell, I’d swum in rougher than that particular day a couple of months before in a New England lake.

But oh, the cold.

It was cold and windy on deck. I was comfortable enough in a skirt, long-sleeved t-shirt and shawl.* Imagining getting in the water? Not so much.

After the cruise, we wandered around a bit. I hadn’t really eaten much of the mediocre hotel breakfast, so was hungry for a snack. We wandered around Pier 39, but things don’t really get started early there. Finally, we walk by a cart selling churros. Believe it or not, I’d never had any, so why not?

The real reason I wanted to try them is dorky. I was screwing around on Tumblr one day, and one of the people I follow had posted in Spanish, that at dawn, someone should look to the east for their coming. They were asked if they had churros, and if they didn’t, not to come. (It was funnier in Spanish) I was proud of myself for being able to figure it out… Look, I told you it was dorky.

We watched the sea lions after that. I love those critters, I really do. They smell awful when the wind shifts, mind, but there’s something about them that’s just a joy to watch. We hung out sipping coffee and listening to them bark and call and warn each other from different docks before moving on.

Aquarium by the Bay

The Aquarium by the Bay focuses less on the pretty tropical fish and more on the local sea life. For me, that was the real charm. There was a Pacific Octopus (which I did not taunt), and a wonderful tunnel beneath a huge tank rather like the one at the Virginia Aquarium that gives you the impression of walking along the ocean floor along with the fish, included an exhibit devoted to local sharks. Well, the non-scary species, anyway. No, seriously, there’s only about five species out of thousands that are human aggressive, and no, I am not scared of all sharks, just the human aggressive ones.

After that, there was an exhibit on the waterways in California that feed into the SF Bay, and places you could touch certain sea life. They had stingrays, small sharks, and sea stars. They also had an exhibit of river otters! I love otters, and these little fellas were adorable.

We ate at the Eagle Café for lunch. Peter had clam chowder in a bread bowl, and I had a crab salad. Okay, this is where I gotta let my East Coast out.

Ain’t no crab like a Maryland Blue. Just sayin’.

Don’t get me wrong, the meal was good and well-prepared, but I gotta represent for the Chesapeake Bay, ‘kay?

Speaking of which, when I think “bay” I think something like the mouth of the Chesapeake. San Francisco Bay was very different. Felt like you were in a bowl or something. Beautiful? Beyond a doubt. I really do love the area and want to go back. But it doesn’t have that “big water” feel I get at home. (Then again, the very word is an Algonquin-derived term meaning “Big water.”)

We made our way back to the hotel for a couple of hours so I could catch up on some work for a client before we went off in the other direction to the Palace of Fine Arts.

The palace was originally constructed for the 1915 Panama-Pacific Exposition. This was a huge event and pretty amazing that the city could pull it off, what with an earthquake levelling it less than a decade before. Among other notables who came to see it was Laura Ingalls Wilder on a visit to see her reporter daughter and then son in law.

The structure now contains enormous Greco-Roman columns with female figures, a lovely man-made lagoon with ducks and other waterfowl, gardens and walkways. There is also an exposition hall where kids can explore technological exhibits. There was a Hunger Games Expo there. That… put me off quite a bit, and we did not pay extra to see it.

There’s also a theater that is still in use, giving lots of musical performances.

It’s very beautiful and serene and a great place to go and think.

In Which We Make Fools of Ourselves at Bobo’s

I figured that after our day, we could go to a restaurant near our hotel. So, we decided on Bobo’s because, hey, the name was goofy and it looked like it got good reviews. I tried to get reserve a table, but the online service wasn’t taking them. We decided just to walk around the corner and show up.

The hostess was very kind and did find a table for us. The décor looked nice, and we settled down to enjoy a pleasant meal. Opening our menus, we about dropped our eyeteeth.

And ran like scared rabbits. Yeah, we’re rubes. Go ahead and laugh.

We hopped the bus to Fisherman’s Wharf and went to Wipeout. Not sophisticated, but I’m sorry. I’m just not enough of a foodie to eat at the high-priced places.

After that, we hung walked off our dinner and went to bed, wondering what we should do for our last full day in San Francisco.