We spent the day getting lost. It was awesome. I highly recommend going to cities and getting lost when you can. You see more and learn more that way.

Getting Lost at the Golden Gate Bridge

It takes skill to get lost here, and I’m not going to recommend it necessarily for a first attempt. It is difficult to get lost when you have a large landmark by which to navigate. But Peter and I were feeling ambitious, and we’ve had a lot of practice at this, so confidence was high.

We started out pretending we weren’t going to get lost. Nope. We were going to explore the Golden Gate Bridge Welcome Center. We took the 28 bus from Van Ness and Chestnut to the Welcome Center at the Golden Gate Bridge. The fog was so thick you could not see the bridge. Nope, I was not disappointed. I’ve read a lot about San Francisco, so a nice thick fog was really just part of the experience I was expecting and made it fun. 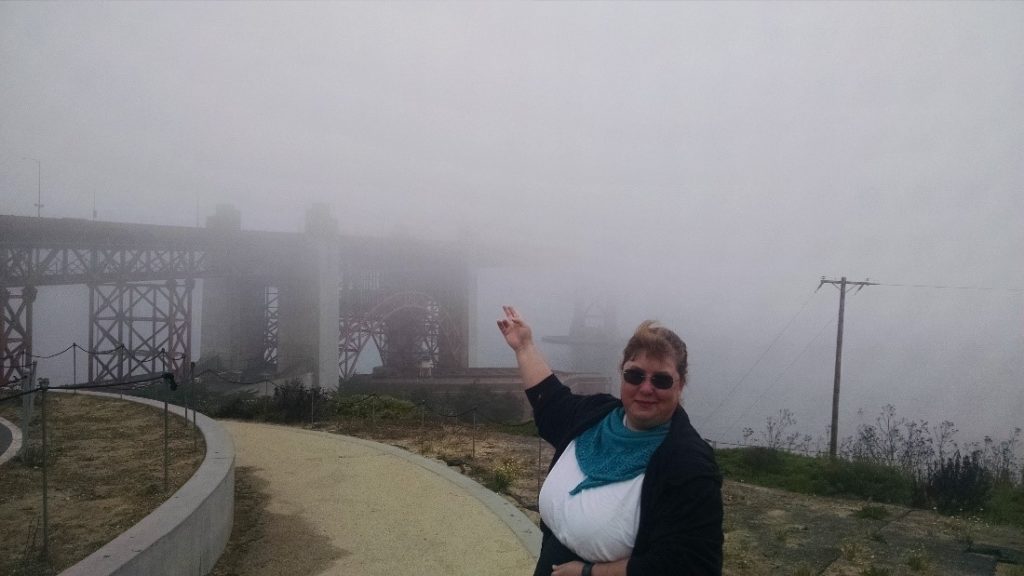 There’s more than just the bridge itself to view, though. There were exhibits explaining the construction of the bridge, the principles of its aesthetic design, and the engineering that went into its structure. You could experiment with tension and torque with hands-on models. I loved being able to play with this, and it made me think of my dad quite a bit. You can’t go to Disney World with the man without and engineering or physics lecture. No, that doesn’t screw up the magic. It proves just how magical we hairless monkeys really are!

In exploring, we discovered that the bridge is painted International Orange. Except for the Golden Gate Bridge, I have rather an aversion to that particular color. I think mostly because I spent most of my childhood with that color trim in my bedroom. (This was my own fault. Mom and Dad let me pick out the color at four, and I was in a fire tones phase that only lasted a year. I was stuck for another fifteen years!)

Peter mentioned that Fort Point was nearby. Looking down the cliff, you could see it. We decided to walk down a winding path to the fort for a couple of reasons. A) We like historic buildings and B) It’s the site of the Gaean Embassy in the Gaea Trilogy by John Varley. (Getting sick of how fiction drives my choices? Aren’t you glad you weren’t dating me as a teen?)

We start down the path. The paths are made for both pedestrians and bikers. I love how San Francisco has these areas separated from powered vehicles where people can walk or bike. The town I live in has some similar projects, and I am very much for it. Being able to get outside and not worry too much about cars is nice. I like to take walks, and this one was lovely.

After about a half mile, we’re trying to figure out where the heck the path is to Fort Point. We can see it sometimes when we round a bend, but we can’t figure out which path to take to get there. As we go along, we see small animals and local flora. Signs caution us not to pick the flowers or mess up the wildlife. I’m cool with that. I’m sure the plants anchor the sandy cliff, after all. It’s beautiful and serene, and I stop caring where I am because the walk is nice.

We wound up back where we started.

With a shrug, we decided not to worry about it and get a cup of coffee. Perhaps the Gaean Ambassador was drunk on tequila and couldn’t see us, anyway.

We decide to hop on the 28 bus to go back into town and see if we can explore a bit of Ghirardelli Square. As we’re pulling away from the bridge, I’m not recognizing the roads, but it is only when we pass Golden Gate Park that I realize we’re going the wrong way. After a short discussion, we decide to stay on the bus and see where it takes us. We wound up going past SF State University, a French Lycee, a mall and several other places before getting to the end of the line.

In San Francisco, buses don’t run continuous routes as they do in my own town. At the end of the line, you get off to catch the bus going back. We did and were approached by some tourists asking for directions.

Peter and I have had this happen since our honeymoon. We’re tourists. We are still asked for directions. I guess we look non-threatening or something.

We went Ghirardelli Square to have some lunch and wander around. We had a proper pizza Margherita — fresh mozzarella, tomatoes, and basil leaves. Done right, this is Pizza Purity. Waxman’s in San Francisco does, and it was beautiful. Not only that, I had a dark roast pour-over coffee so good it quite literally brought tears to my eyes.

San Francisco has this habit (at least in the tourist areas) of having small braziers and outdoor heaters on sidewalk cafés so that even in the chilly but sunny weather, you can enjoy being outside. It’s rather a good idea, and we saw several of these in Ghirardelli Square and Pier 39. I suppose it’s rather like Disney World blowing cold air in lines. I know it’s not energy efficient, but it is comfortable.

After shopping for a bit, but not buying anything (sorry tourist bureau!), we decided to go to Ghirardelli’s itself for something tasty. We split a caramel, fudge, and sea salt sundae, and were happy with Life. We did not get lost and were feeling our failure as we thought about what to do for the evening.

We went to Chinatown for dinner, but I think we should have gone earlier so that we could wander around more. A friend of Peter’s wanted to meet up with us, so we met up at Henry’s Hunan on Grant Avenue.

The food and company were excellent, and we had some help getting lost this time. One of the larger streets, Columbus Avenue, runs diagonally across the grid of the city. As a native of the DC area, I knew this would be a great aid in getting lost, and in addition to having the navigation issues, we also had great help from Peter’s friend, who forgot where she parked her car.

We wandered around the streets for a bit, trying to find the parking lot, and decided to have a little dessert at a small Italian place that served espresso, coffee and all sorts of Italian pastries. Peter got a Tiramisu, which he had never tried before. (I suspect he will try it and try it after this, though)

Thus fortified, we again attempted to find her car. Finally, she got a taxi to drive around until she spotted the parking lot (this is advanced Getting Lost, and a technique I need to remember!) then she offered us a ride back to our hotel, which we accepted.

For our last full day in SF, it was a good one.

One Reply to “San Francisco Day Three: Getting Lost for Fun and Profit”