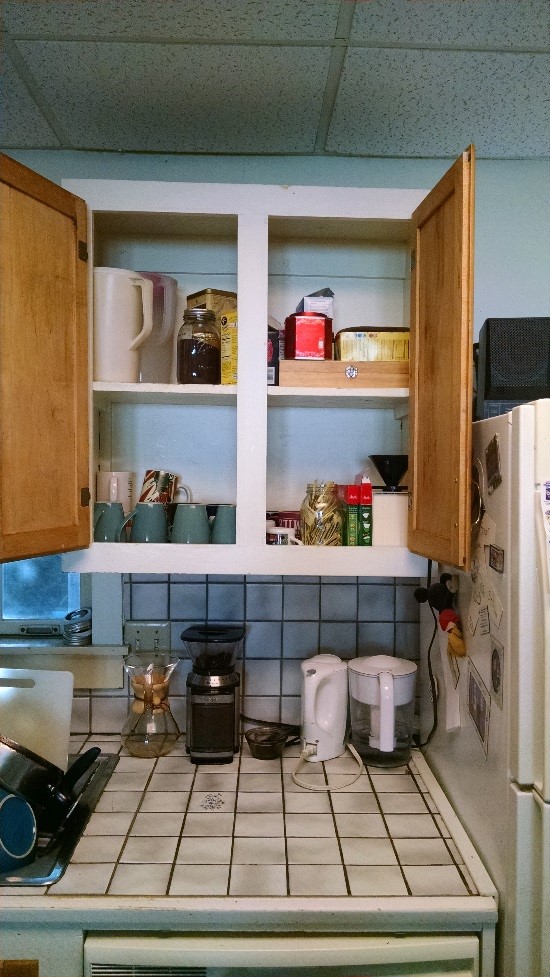 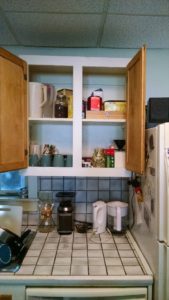 I did not expect the kitchen to be the big deal it was. I love my kitchen, so I figured this was going to be a breeze.

It wasn’t and at least in part it wasn’t because, well, the reason I love my kitchen is that it is large and has a great deal of storage and counter space. That means that I had to confront more stuff at one time than I did with any other category in the process so far – yeah, even more than my books. Try emptying out every single cabinet in your kitchen some time and you’ll see what I mean!

We have so much space that one entire cabinet had become a “miscellaneous cabinet” and had stuff spilling over onto the counter beside the phone charger we’d built.

It’s our own fault. We had a bunch of baskets where we’d empty our pockets and stuff in the evening and toss things in we couldn’t be bothered to put away. The cabinet had a bunch of OTC painkillers and allergy meds – some of them as much as five years out of date because the cabinet was so cluttered we’d forgotten what we had and where.

I also figured since I was emptying every cabinet I owned (taking the opportunity to clean the shelves) that I should give more thought to where things were stored.

We have some glass plates we really like. I like glass. It’s cheap, sturdy and looks nice when you use it (you would not believe how many “fancy” serving pieces I’ve picked up from the dollar store). I’d picked them up at Wal-Mart and was happy to have them so that we could use them for parties rather than wasting money and resources buying paper plates. Being glass, they were equally appropriate for a birthday party or Christmas. Well, it turns out that they are the perfect size for a lunch salad, and my husband is fond of using them on a more regular basis. It wasn’t what I intended, but who cares? I’m all for enjoying what we have!

Because I had intended them for party use, when I originally got them, I stored them on a high shelf. It was easy for my husband to reach up and get them. He’s a foot taller than I am. If I was the one to empty the dishwasher, it was a royal pain in the butt for me to put them away. But we didn’t have another space for them!

Well, after decluttering and giving it some thought, I decided to move things around a great deal. We used to keep food in the cabinet in the picture. I decided that this was silly. As you can see, this is where we keep our kettle, Chemex coffee maker, coffee grinder, and water filter. Since this is the hot drinks station, maybe it made more sense to convert the cabinet to that purpose as well. I changed where I stored the tea, mugs, Splenda, drink pitchers, and coffee filters to a centralized space. No more wandering around the kitchen to make a cup of coffee.

We’d also developed the habit of storing pasta boxes, oatmeal canisters, and cereal on top of the fridge because the food cabinet was too small. The cabinet where I moved the food is about six inches wider, so there is plenty of space to store the food in cabinets. I like that better!

I got overwhelmed about halfway through the process. There’s just so much in my kitchen. I was starting to take baking dishes in hand and thinking they didn’t spark joy. Even so, I didn’t get rid of any of my glass baking dishes. I figured if I don’t use them this winter I can let them go.

Part of it is also there has been a significant change in the way I cook now that I’ve gone from cooking for six over the years to cooking for two. I have a really nice, big toaster oven. I can cook a meal for two in it just fine, and often do. I just don’t make a great big lasagna that often, and I can bake a loaf of bread just fine in my toaster oven if I want, so why do I really need four loaf pans?

I kept more of my bento stuff than I thought I would. It sparked joy when I picked them up, even in the throes of the overwhelm. I did toss a lot of cheap plastic storage ware. What I really like for storage for things like leftovers are Pyrex dishes with lids that fit. They clean better and you can use them in the microwave better, too. I may wind up picking some up over time. Even with as much as I threw away, we still have plenty.

I did not touch a lot of the drawers. My husband had decluttered them a few months ago, and we actually use everything in them on a regular basis. Maybe I’ll get a wild hare later, and I know you’re supposed to touch everything you own, but I’m giving that a miss. I got rid of three lawn bags full of stuff for the kitchen, and I think that is enough.

So, the next thing I need to do is go through the pantry off the stairs and the laundry room, and then I am done but for sentimental items.

This has been quite a ride. While as an adult I’ve had homes that were visually neat, I’ve never, ever decluttered so much that even my storage space was neatly organized.