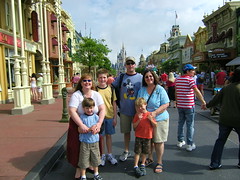 I’m having a hard time settling down to write a good trip report on my trip to Disney World, so instead of talking about the rides and stuff, I’m going to make some recommendations for people who are going. (If you have questions about the rides and attractions or wanna talk about ’em, I’m delighted to do so in the comments.  It’s just that I’m having a terrible time organizing my thoughts.  Sorry about that).

Now, from the ages of 3-25, I went to Disney World about every two or three years. So I’ve been there a LOT. I didn’t do any real research on the trip. I know Disney and didn’t need to, right?   Well… if I’d thought, I’d remember that the parks are always a work in progress.  After fifteen years, yes there have been a lot of changes.  First would be that fifteen years ago, I was not using the Internet.

Some things that are useful to the Disney traveler:

1. Fastpass.  Many of the rides and attractions have an option to go to it, get a ticket to go through a fast lane at a later time so you don’t have to waste time waiting in a line longer than a half an hour or so.   Once you have the pass, you have about an hour’s window to use it.  You do kind of have to work this, as you can’t get a second Fastpass until the time for the one you have begins.  You also have to plan ahead with this, because there are a limited number of Fastpasses for each ride available, and they’re usually all gone by four in the afternoon or so.  But if you work it, you can get the pass for the big attraction, do the smaller stuff in the area and then are able to get on the big ride pretty quickly.   You can go online and create a map for yourself of any park with what you want to do marked.  I didn’t find this out until I had no printer available and downloading it to my Palm was too much of a pain in the butt.

2. Dinner Reservations.  Oh yeah, you can make reservations for on-Property restaurants up to two weeks in advance online.  I found that making them the night before worked out okay mostly.  EPCOT’s teppanyaki restaurant books sooner than that.  (But the Japan pavillion has another restaurant and the sushi there is excellent).  I didn’t figure this out until we’d already been to three of the parks.  I suppose I’m a bad geek and just don’t deserve another Disney trip. 🙁

I really recommend an hour or two online at the WDW site for each of the parks you want to visit.