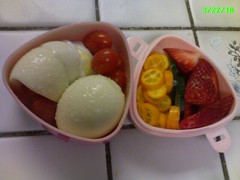 This is a breakfast bento I did for tomorrow.   I’m opening the gym, so I’ll be up very early.  I also need to get in my weight training before I teach, so I won’t have a lot of time between that and getting to the place where I’m teaching a class.  Sure, the class has pastries and stuff, but I’m No-Sing and I hate teaching on a sugar high.  Hence the bento.

The bento case is actually supposed to be an onigiri case.  Yes, onigiri for breakfast is also pretty tasty, but I wanted eggs.  So the lower case has two hard-boiled eggs and some grape tomatoes.  The other half has some sliced kumquats, a cucumber slice divider, and some sliced strawberries.  All in all, a nice breakfast.

It’s not that one couldn’t pack a meal that pays no attention to aesthetics.  But I’ve always liked food to look kinda nifty.  When I was a Brownie scout, the handbook had a recipe that was basically a fruit salad in the shape of a clown.  I thought it was awesome.   I used to make a fruit salad with an apple base, where the apple was scooped out and the salad served in the hollow of the apple.  (I probably haven’t made that in 30 years, Lord knows why…)

And as goofy as it sounds, an attractive meal is somehow more satisfying.