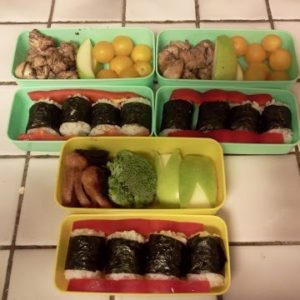 These bento boxes were the family lunches yesterday, as my son went back to school for his senior year.

The rolls weren’t really sushi, but tiny onigiri rolls. Tasty as onigiri always are, but bite-sized. I suppose at some point this year, I’ll make a bento-friendly maki roll, but this wasn’t it.

The yellow box has hot dog octopi as the meat, per my son’s request. The other boxes have chicken bits cooked in garlic and wine.

Then, I filled in the corners with various raw veggies and fruits I knew the family would like.

Is this a particularly special bento? Nope. Just lunch, though hopefully moderately attractive and appetizing when one opens the box.

And that’s the point.

A friend of mine bought his daughter a bento box recently. His wife (also a friend, though we’ve not met in RL yet) was looking for bento recipes, which kind of prompted this post.

Bento recipes are fine, but to make bento, you don’t really need recipes so much as you need to have a bit of a philosophy about how to make the food.

So, here my personal bento principles. (If you like them, awesome. If not… I’m not cooking for you, and you’re dealing with your food, not mine).

The point is, though, that making miniature lunch boxes, which by the way, if packed right really are filling, don’t have to be complex. Nevertheless, they can be a lot of fun!