I was asked how to go about doing bento and wound up writing a reply that was far, far too long for the comments, so I’m posting it. Forgive me if this is something that bores you.

A bento is a portable (usually single serving) meal.  That’s really about it.  The word is Japanese and what I do is, indeed a Japanese Bento. Though, I often put a twist on it and make Western food if the Spirit moves me.  A classical Japanese bento is 4:3:2:1  or four parts rice or noodles, three parts protein, two parts veggies and one part sweet (fruit is dessert in Japan and on par with a cookie, from what I gather).

Japanese bento boxes are very small, but if you pack them according to the formula and pack them tightly then you’ve got about the right size lunch.

A really good basic bento site is Lunch in a Box.  The author likes to look at what she calls “food art”, but when she makes bento, she’s making lunch and isn’t going for more than a simply pleasing arrangement in the box for her son.  If you google Bento and click on the images link, you will see some of the most amazing food art.   I don’t do that, myself, either.  I just like the food to look pleasing, but I don’t do characters or stuff like that.

I also like Cooking Cute, though she’s got a little baby and isn’t updating much.  She’s much more into the food art and makes some cool stuff.

Then there’s Just Bento, which is a perfectly delightful site written by a woman who is actually Japanese, grew up with a working mother who made bento, but certainly didn’t make the fancy character bento!   Her onigiri tutorials are really good as are her cultural discussions about bento and Japanese life.

All of these sites focus more on the meal than the art, which is my personal preference. 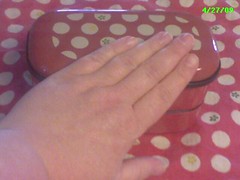 The boxes are quite small, as you can see here.  I can cover the top of the average Japanese 2-tier bento box with my hand and I’ve small hands.  The boxes are only about six inches long.

You don’t have to buy the cute Japanese box, though.  Plenty of people just buy a shallow, flat container that has a lid that closes tightly and use that.  (For an adult woman, you want about a 600ml container.  My bento is 580ml, so that’s close).  I get the cute things because I like them and for no other reason.  The cloth came with the bento set you see there, but for other bento, I often use a large bandana as the furishoki (wrapping or tying cloth.  I use the cloth as a napkin, too).

Because they’re so small, they fit in a large purse just fine.  I take them with me as a travel meal, especially on trains, though  hear that if you’re careful what you pack, they’re good for airplanes, too.  This is a nod to the Japanese tradition of the Ekiben, or train station bento. 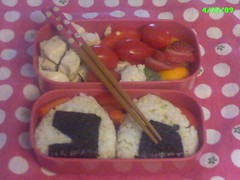 This is my lunch for today. Brown rice onigiri (rice balls) with a non-traditional filling of Indian mango chutney, red peppers, grape tomatoes, chicken, bits of broccoli, a couple of sliced strawberries and a couple of kumquats.  Ideally, you try to put a lot of different flavors in a bento, but you don’t have to.  This is a hobby for me, but let’s be real. It’s just lunch.    I do it in part to force myself to have at least one really balanced meal each day and make them for my family because it’s just as easy to do an assembly line of them for everyone to have a nice lunch, too.   There’s a lot to be said for a pretty, colorful meal.