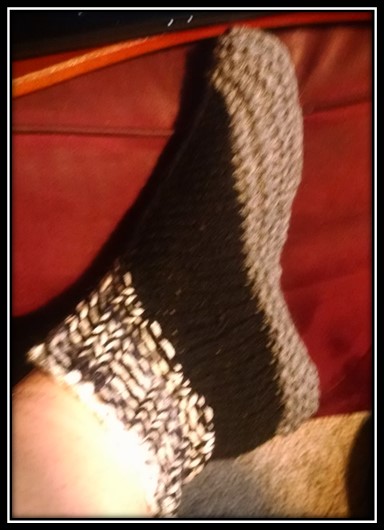 As a reward to myself for getting up at five in the damn morning to get my long-neglected swim in, I decided to blow off housework to knit, finishing these little slippers, called Dorm Boots. They seem to have originated from an old pattern in the early part of the Twentieth century, they developed and updated over the years. I’ve seen variations that were knitted flat (I freely admit I found the pattern too confusing) to the variation you see here, which was knitted in the round.

I made them out of some scrap yarn I had left over from my latest shawl. Like the shawl, these things make me absurdly happy.

They’re very easy. All you need to know is how to knit in the round, decrease left and right, purl and sew up a seam. The bottom of the slipper is actually knit open, and you sew it up at the end. If you want the pattern, click on the image. It’s free, and quite useful.

I was questioning the garter stitch at the soles, but I think I get the point. You really do want a little texture on them. I’ve walked across the tile floor in my kitchen and the texture, even with acrylic yarn, is enough to reduce the chance of slipping.

For people who want comfy house-socks that are warmer than the thin ones you wear under your shoes, but don’t really want to commit to a heavy slipper, this is a good intermediary. I would also consider them good bed shoes for people who wanted to wear socks to bed.

I made them out of acrylic, and I think I would only want to make them out of an easily washable yarn, unless I were to make the deliberate oversized to felt on purpose. I’m tempted to try that, as I have some heavy brown Fisherman’s Wool left over that would make a warm slipper, indeed.

Ah yes, getting the swim in.

I’d been neglecting working out for some time, and was spurred back into a proper routine by a couple of things. First, I threw out my back. I have never in my life had back trouble before. It’s awful and painful and if you’ve been through it, I don’t have to tell you anything. If you haven’t? It sucks. It was from sitting in a bad chair and not working out. I fixed the chair while my back healed well enough to move without much pain, then I got back in the pool. I’d always had a strong back, so that was a bit of a shocker.

The other was a comment my son made while he was visiting for Thanksgiving. My parents had sent up with him a box of memorabilia from my childhood. In it were a few swim team ribbons (I never got better than second place, and I’d been on the swim team for longer than I’d remembered!), a bunch of pictures of me on various soccer teams and several Karate (Isshin-Ryu) certificates. He commented that he did not know that I was an athlete when I was a kid.

That brought me up short.

But I never really could get into exercise for the sake of exercise, even though, yes I need to move or my body breaks down! Taking a walk? Well, it’s nice as a way to socialize with someone, or while listening to a book or something, but I don’t love it for the activity itself. Running? Running is for people who can’t swim. Exercise classes? *shudder* Not unless they’re highly skill-based, and in that case, I’m into it because I’m learning the skill. Weights? Okay, ya got me. I get a kick out of lifting heavy stuff.

But while I know that I do need to make sure to move my body regularly to counteract my sedentary profession and other hobbies (knitting ain’t exactly active, is it?) I always need a physical hobby to make sure that I’m active enough. And that’s the thing. I see myself as having a physical hobby – not as an athlete.