I really need to buckle down and finish 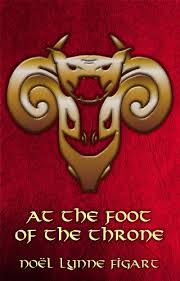 Astride the Border, the end to At the Foot of the Throne. Nope, it’s not going to be a trilogy, and frankly the two “books” are really one novel. Not that I have the slightest idea what to call it as a single work. Possibly it could keep the original title, though I expect as the plot of the second story unfolds, one would question that as a good one. *grin*

I actually have the book notecarded and some 65,000 words written on it, so I’m really more than halfway there. Just a matter of getting a writing schedule and applying butt glue. Since my other big Life Goal is pretty physical, this is really a pretty good counterpoint to that. You know, the whole “healthy mind in a healthy body” thing. (And my son, yes, I’d love to read your essay on that very subject you did for school!)

Here’s the thing. I’m not in love with the characters. Oh, this is much better fiction than I usually write, being only an egg in the learning process. But no, I don’t love these characters the way I love others I have come up with, but no-one has ever seen.

This isn’t to say that the work isn’t good. The reason I don’t love the characters?

They’re too real. I frequently want to yell at them for being stupid, or knock them upside the head for being foolish and prideful, or blind and selfish. I can’t look up to or be enamored with them because they’re too real and flawed.

This isn’t to say that anything I love has to be perfect. I love plenty of people, but I know of no perfect ones. It’s just that for the most part, no, I wouldn’t really want to be close to or trust any of these characters. No, not even Marra. Seija, maybe. Sometimes. When she isn’t being thick as a yard of lard. And okay, Berat, but he’s shamelessly based on a real man I was missing at the time I came up with the characters.

So for now, I need to come up with a realistic writing schedule that takes into account the other stuff I do. I may wimp out at 500 words a day. But slow and consistent gets it done better than fits and starts of Heroic Effort.