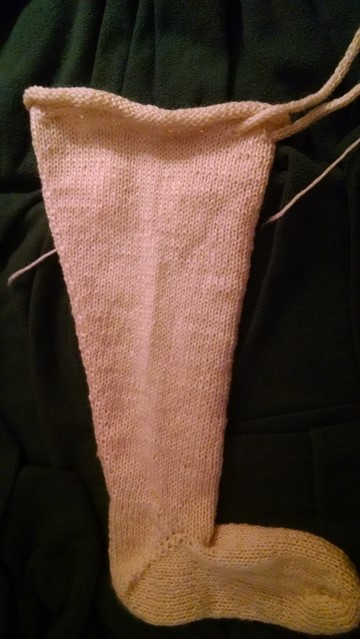 I overbought majorly on the aran weight cream colored wool for a sweater I made back at the beginning of the year.

In pondering what to do with the leftovers, I considered making some knee-high socks. I like to wear skirts, but in winter weather, really do want something warm on the exposed parts!

The problem is, when I knit knee socks, invariably I either need a sock garter to keep them up, which brings me back to the days of being a Junior Girl Scout (yes, the uniform used to have knee socks and sock garters with an orange tag, and boy does that date me) or I have to really narrow the top of the sock so it won’t slip down my calves, which makes it a little uncomfortable.

I was feeling kind of whimsical when I was thinking about making these socks, and remembered a tea cozy I made with part of the leftover yarn (I told you I seriously overbought). The pattern called for the top of the tea cozy to have a series of holes through which you could thread a drawstring. This would enable you to take the top off the teapot with the cozy still on, and then tighten it back when the top was replaced.

I decided, what the heck, I’d try it on the tops of the socks.

Friends, this really works well. It’s a cute take on a sock garter, and has the advantage of being pretty flexible about how tight you tie it.

I was telling my husband about it and he commented with delight, “You invented something!”

Going into Lecture Mode (hey, I’m a teacher among other things) I commented, “No, honey, I unvented it.”

This is actually a fairly important concept in knitting – one I’ll turn over to the real unventing expert – Elizabeth Zimmerman:

Do you mind the word “unvented”? I like it. Invented sounds to me rather pompous and conceited. I picture myself as a knitting inventor, in a clean white coat, sitting in a workshop full of tomes of reference, with charts and graphs on the walls. Not real knitters’ charts, which are usually scribbled on odd and dog-eared pieces of squared paper, or even ordinary paper with homemade squares on it, but charts like sales charts, and graphs like the economy. I have a thoughtful expression behind my rimless glasses and hold a neatly-sharpened pencil. Who knows but that I don’t have a bevy of hand-knitters in the backroom, tirelessly toiling at the actual knit and purl of my deathless designs?

But unvented—ahh! One un-vents something; one unearths it; one digs it up, one runs it down in whatever recesses of the eternal consciousness it has gone to ground. I very much doubt if anything is really new when one works in the prehistoric medium of wool with needles. The products of science and technology may be new, and some of them are quite horrid, but knitting? In knitting there are ancient possibilities; the earth is enriched with the dust of the millions of knitters who have held wool and needles since the beginning of sheep. Seamless sweaters and one-row buttonholes; knitted hems and phoney seams—it is unthinkable that these have, in mankind’s history, remained undiscovered and unknitted. One likes to believe that there is memory in the fingers; memory undeveloped, but still alive.