An aunt gave me a tablecloth that my great-grandmother had made. It’s linen and it had been stained. I knew you shouldn’t use chlorine bleach on antique linens, but other than that, I was not sure how to revive it. As a matter of fact, chlorine bleach can leave a stain on antique whites. I am not sure if that’s what had happened here, or if it was something else – food, time, long-term storage… It’s hard to say. 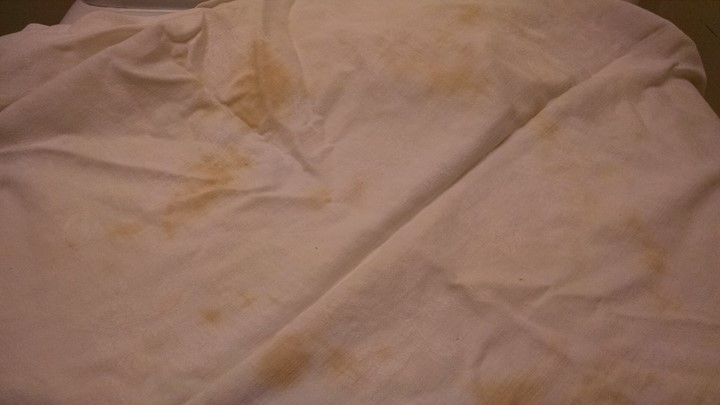 So, there were several stains on it even though I’d washed it and hung it outside in the sunshine.

I didn’t sweat it too much. The stains were covered by the table runners I’ve made, so what the heck? It was my great-grandmother’s, which meant I was sentimentally inclined to use it.

I read an article (I am not sure where) about using oxygen-based bleaches like Oxyclean to get stains out of linen and I figured it was worth a try, since it was unlikely to hurt the tablecloth.

I mixed up the powder according to the directions on the package (yes, I read directions. I spent a couple of years writing knowledge articles for techs and people who don’t read directions make me wanna smack something) and soaked the tablecloth. After checking it a couple of times, it looked safe to risk soaking it all night.

When I washed it this morning:

If you look really closely, you can see a couple of faintly yellow spots. But I’m happy to have a nice, white tablecloth where I don’t have to count on runners to hide the stained spots.

I also have some badly-stored linens from when I was first married that I’ve kept, but never use. Guess what I am going to do next?

One Reply to “In Praise of Oxyclean”