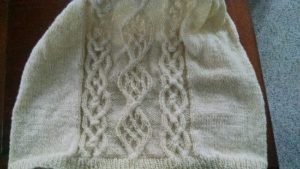 I’m hard at work on a sweater I’m knitting.

As I’ve mentioned before, I don’t do patterns. Well, not well, anyway. Once I learned the Tube Theory of Garment Design (known to knitters as Elizabeth’s Percentage System) I didn’t really need them. Knit a swatch, measure your body, do a little math, decide what design elements you want to add, and you can make a sweater.

I expect, years ago, this is more or less how people knitted. You learned a template for a garment, then you played with patterns or color or whatever, and that’s where a lot of our knitting innovation came from.

Of course, the real expansion of creativity came when these ideas were shared broadly. At first it was patterns in magazines and books. Think of people who learned new techniques from Barbara Walker’s top-down techniques or how many people (to this day) keep some of her stitch dictionaries in stock. In fact, the cables I am knitting at this moment come from her work. But even television got into the act for spreading and developing the craft. Think of how many knitters learned from Elizabeth Zimmerman’s television show and books.

The Internet has been amazing for spreading ideas as well. If you learned to knit in the 21st Century (I didn’t, but that’s when I got more serious about developing it), you probably spent some time on Knitty. That’s where I first learned to knit a cable from the pattern for the Coronet hat, which I later incorporated into my Roll Your Own Braided Yoke Sweater. It’s a pattern I don’t charge for, as I shamelessly stole the basic design of the sweater from Elizabeth Zimmerman, and the braided hem concept from Alexandra Virgiel, the author of Coronet.

Which brings us to Ravelry! My word… That’s over four million knitters and crocheters who see other people’s work, design patterns (even I have one), share techniques, and get ideas for their own knitting.

So even though I’m unlikely ever to knit a sweater from an Official Pattern and probably knit more like a crofter back before the steam engine was invented would, certainly I owe a great creative debt to knitters who came before me and shared.