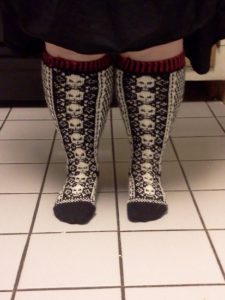 Again, to write my words.

I am wearing a pair of socks that I knit almost two years ago. And dammit, they’re slipping down my legs because I am losing weight, so they don’t quite fit right any more. This makes me a little sad because they’re some amazing socks. Skulls of my Enemies, they’re called, and based on a pattern called We Call Them Pirates.

Now, of course, the cool thing about being able to knit well is that I can make these socks again any time I care to, no matter how much smaller or larger my body gets. I like that skill, though these socks do take a long time to knit.

I am also thinking I need another sweater. I’m currently working on a pair of socks that I may wind up giving to someone, as they’re really pretty, a sweater for my son, and a scarf for one of my oldest friends.

I had forgotten, but she reminded me this Christmas that she actually had a scarf that I’d knitted for her back in high school. (I didn’t get seriously into knitting until I was in my thirties, but Mom taught me the garter stitch when I was a kid. That scarf has long since gone where good scarves go, so I agreed to make her another one. This will be a much, MUCH better scarf, as I’m a considerably more skilled knitter. I’m taking the idea from the Big Bad Baby Blanket and using a seed stitch border so that the stockingette body doesn’t curl. But, that’s about as fancy as it will get. Much fancier than the garter stitch scarf I made for her when I was in my teens, but a simple knit for me now.

My son’s sweater is going to be a golden yellow raglan knit in the round with hemmed sleeves and bottom. It’s an incredibly simple knit, but it’s his favorite style. He likes simple, I think.

After that, I think I am going to knit something for myself. I think it’s been at least two years since I’ve knit a sweater for myself and my sweater collection is getting a little ragged. I have sweaters I’d knitted for myself in 2007, 2008 and 2009, and I think I’ve about worn them to death. Not that they’re not still good for warmth, but as far as something “nice” I’d wear to work, these have passed their time for that. Also, they were knit with Lion Brand Wool-ease and that just doesn’t hold up to frequent wear (I live in Northern New England and it’s COLD up here) the way that a 100% wool sweater does.

I have a couple of ideas. I’d like an Aran, but standard Arans are a bit bulky for me. I have a round, deep body (always will!) and need something with a bit more drape. I was thinking maybe a finer gauge and sport weight rather than worsted weight yarn should give me about what I want. I’m going to have to dig out my book of cable patterns and see what I can come up with for that. I think I’m going to want smaller and more graceful cables with possibly something more intricate down the center. That actually works pretty well. I knitted a sweater for my father like that for Christmas and it suits him.

In fact, I am wearing a pair of earrings like that right now. They look like sparkly silver earrings, then you blink and realize they’re Mickey Mouse.

So, yeah, lots of knitting plans. The thing is, I have more knitting planned than I have knitting time. I have been screwing around and not getting in good knitting time when I am on my lunch break or am at work. I mean, these 750 word entries don’t write themselves, and I am dedicating a lot of time to swimming.

But the beauty of knitting is how it fills in the little minutes you have to spare, then you come out with this big body of work that seems all impressive, and no-one knows you were just filling in time on the bus, or watching a TV show.

One Reply to “Knitting and Daily Words”